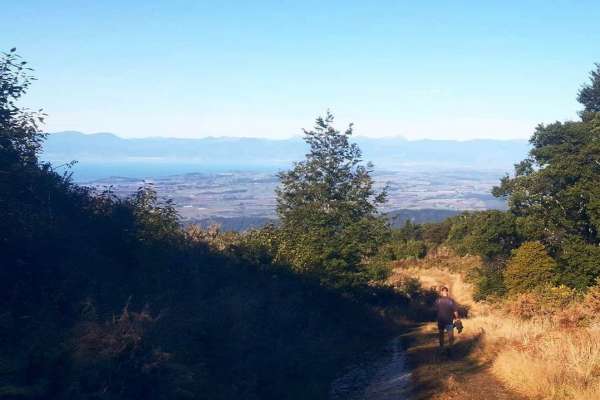 At 1330 metres high and visible from Motueka, Mt Campbell with its communications tower stands out indeed. Julian and I did a recce a week before in perfect weather, no wind and warm conditions. Alas on this trip it was not to be, but we didn’t have to put on our raincoats and frankly the cooler weather and mist made the trip more comfortable. Eleven hardy souls turned up at Richmond Badminton carpark and in three cars we were at the start in less than 90 minutes. Rocky River Road is a little rough but our vehicles had top drivers and so no problems. We had to park about 400 metres from the gate as no room further on. It is basically a four-wheel-drive road to the top. Introductions done it was straight up, steep and it wasn’t long before we were spread out so as it was nicely pointed out to me I had to keep us together. Upon reaching the gate some of us climbed over it but a few of our ladies showed great flexibility in going through the bars. A little further on morning tea was had beside an old tin hut and the group had a brief view of Motueka and the sea. The wind started to pick up and we soldiered on at a steady pace but in the mist we couldn’t see the tower. The track levels off for about a kilometre before the last climb to the tower. It was here I let people go at their own pace. Anja and Ian (a visitor from Scotland) powered up and left everyone in their wake. All were at the top by about 12.20pm but unfortunately no view. There’s a wooden table with seats at one end, and plenty of flat rocks by the trig which is where we had lunch. Ian looked onwards and wondered if there was a trail to Flora Hut (I believe there is), as he was planning another challenge. The two young lads (if you’re under 30) were loving this and may join Ian on his next venture.

At 1pm we made our way down and suddenly it was quite cold but only lasted about 40 minutes. All of us together now and Katie had a good idea for a trip I could lead in the Blenheim area. And soon enough that gate again and I tried to go through the bars this time but Marion was not impressed with my technique (too stiff), Donell however was so graceful. Back at the cars by 2.45pm most of went back to Toad Hall for hot drink and muffins. Ian and the lads however had worked up a thirst so a bevvie or two was on their agenda. The group would have done nearly 11km today on what could be described as a decent workout.