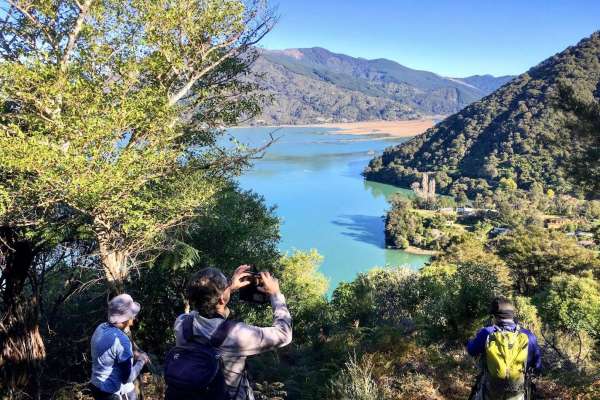 Thanks to Jeff Lukey, the club could spend a weekend at Wakaretu Bay on Pelorus Sound near Havelock in warm comfortable accommodation. On Friday members travelled to this location and settled in, either in the house or in 'The Hut'. Just before dark we walked the Peninsula Track, a 15 to 20 minute circuit. The evening was very social with people doing their own tea and then chatting and or playing scrabble or the 6 dice game.

Saturday morning we left at 8.30am, meeting Esther at Havelock before 9am. We continued on to and then along Long Valley Road to just through a locked gate to park in a paddock. From here we walked across a paddock, through a gate and onward up a farm track to a fence line that went straight uphill. Basically we followed along this fence line until we reached the ridgeline, then headed north to A7FQ at 766m (named Queenstown Hill by Jeff because of its geology being same as around Queenstown). We were very lucky to have a clear, sunny day, which allowed us to enjoy extensive views. Renwick to the northeast, Mt Tapuae-O-Uenuku, Mt Alarm and Mitre Peak, all smothered in snow, stood out proud on our eastern horizon. To the south was the bush-clad Mt Riley with its rocks and mast clearly visible. A sneaky cool breeze sent us down the slope a bit to have our lunch, after which we descended back down the grassy slopes to the vehicles. Altogether a 4 to 5 hour return trip through private farmland. In the late afternoon four members walked the lower circuit (about one hour) at the bay.

The shared meal on Saturday night was dominated by quiches. All very nice. Lots of chat, games of Scrabble and Five Crowns filled the evening. Sunday morning we set off, on foot, shortly after 8am to walk the 4 to 5 hour higher circuit behind Wakaretu Bay. It was a good grunt up to the ridgeline and the reward being good views of the lower Pelorus Valley. We followed up the ridgeline, through kanuka and then into native bush to reach the high point at 572m. The vegetation was varied with native bush, pine forests and kanuka. There were some excellent viewpoints allowing us to look across to Havelock and beyond, down to Wakaretu settlement and bay and into Kaiuma Bay. The horizons were clear and Mt Robertson, with its white dome, could be seen. As were some peaks beyond which we think were in the North Island. By afternoon teatime we had completed our walk and then it was time to say goodbye to group members as they departed for home.