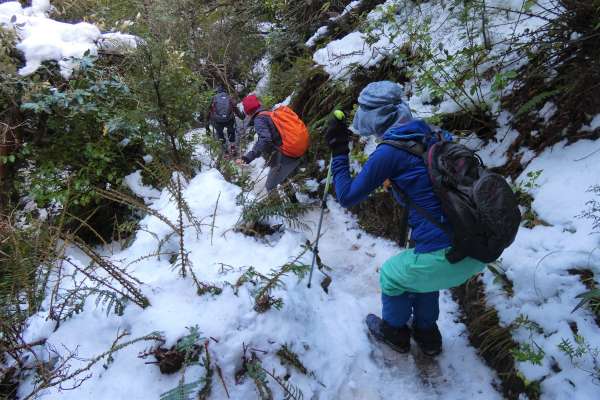 As we had quite a distance to travel, three days was just the ticket  for our Hanmer Springs weekend. We travelled down on Friday morning and booked into our accommodation at the Forest Lodge. What great facilities for a group! By 1pm 12 of the 16 of us had rendezvoused and were ready for an afternoon walk.
We drove to the end of Mullans Road and headed up the Dog Stream Track on the Waterfall Walk. A straightforward forest track soon showed signs of snow, which developed into big drifts and icy steps by the time we reached the waterfall. For our return we chose to loop back along the Spur Track. Poor signage meant we missed the linking Fir Track, and instead we added a bit of spice to the day and battled an overgrown path through a pine tree jungle and then down a bank, before hitting the forestry road and our cars.
Following the Waterfall Walk, we stopped off at the easy-peasy Forest Walk and cruised through the pines spotting the carved wooden sculptures. Some were pretty random e.g. an orangutan?!?  and we thought there were also some glaring omissions e.g. if they have a fantail and a tuatara, where is the kiwi?
The forecast for Saturday was rather mediocre with strong winds predicted, so our planned conquering of Mt Isobel was put on hold. Instead we decided to do the loop of Chattertons Track, and then some smaller walks. Well, we got to Jacks Pass Road at the top of Chattertons for morning tea, and conditions were benign with very little snow, good visibility and hardly any of the promised wind at all.
We split into three groups - one group who were definitely up for summiting, one group who would see how far they could get, and one group heading back to the cars. Long story short - the track was a straightforward above-the-bushline romp, no tricky bits, and 11 people enjoyed lunch at the trig atop Mt Isobel. A grand result!
My first aid kit rarely gets opened, but it saw the light of day on Saturday morning when a roll of strapping tape was used to repatriate the sole of Val’s shoe with the upper. Unfortunately it then got a second outing soon after ...
At about 2pm, on a very muddy and slippy piece of track, Karen took a slide and a flip, resulting in a badly dislocated elbow. ‘Luckily’ we were only about 100metres above Jacks Pass Road, and there was a passing car at the Pass that could take us down to the (specially opened for us) Hanmer Medical Centre.
Another long story short - Karen was taken to Christchurch Hospital A&E by ambulance accompanied by Lesley, while I followed in the car. The elbow was finally 'relocated' and plastered up at 8pm. Karen was later admitted to the orthopaedic ward for the night, and Lesley and I retired to the YMCA.
Meanwhile, back in Hanmer the rest of our group finished the Mt Isobel walk back at the Chattertons Road carpark, and later enjoyed takeaways for dinner. On Sunday morning most went up Conical Hill, then drove home in torrential rain virtually all the way. The original plan was for walks in the Lewis Pass, but alas this was not to be.
Karen, Lesley and I finally escaped Christchurch Hospital at lunchtime on Sunday and  then also drove back to Nelson. Luckily the rain had stopped, but the river in the Lewis Pass was still swollen and heaving, and Maruia Falls was heading towards Victoria Falls status.
Our group was: Diane (leader and scribe), Karen (all ticketyboo now), Lesley G (nurse extraordinaire), Robyn, Donell, Alison, David M, Esther, Eric, Anne, Anthea, Val, Christine H, Christine L, Paula G, and Pete who missed all the adventures as he went mountainbiking instead.