Snow-capped peaks in the park 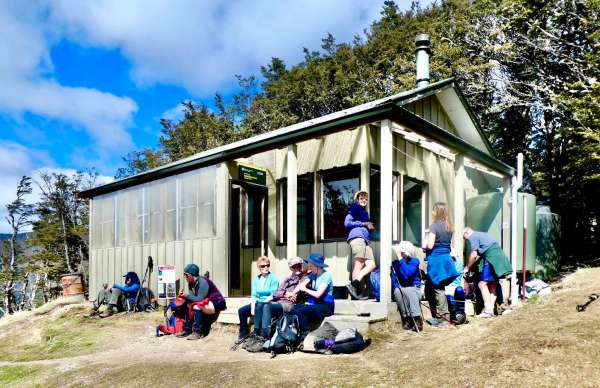 Mt Robert is located in the Nelson Lakes National Park. Although one of the lower summits in the park, the views overlooking St Arnaud are impressive, the tracks to it are well marked, and people of average fitness can do this loop. It takes around 90 minutes’ drive from Nelson to reach the start at the carpark on Mt Robert Road.

Sixteen keen trampers started up the Paddy’s Track around 10am. This track cuts across the mountain’s open face after several scree filled gullies. It didn’t take long to warm up and after about 35 minutes a morning tea stop was had with a great view of Lake Rotoiti. Carrying on the track it eventually opens up and zig-zags; this section has the ideal gradient if you want to push yourself, as some did. With the sun out, there were some good sweats to be had. Others on the track included members of the military - big muscular fellas, they were game and willing. We reached Bushline Hut (14 bunks) and regrouped.

It was uphill again but after a short time we came across pockets of snow. The track was a little muddy and the wind picked up slightly, but our guys all had the right gear. It was one of those days where one takes off and puts on layers of clothes. Upon reaching the junction of Robert Ridge most decided to carry on left to view a lookout of the old skifield and buildings.  The track starting to have more snow on it and in some areas was fairly deep - it was worth the diversion. We retraced our steps and joined the others at the Relax Shelter which was a few metres from the junction.

No one was in a hurry to move on as we were making good time but the cloud was moving in and getting colder, so we ambled down.  Before too long the cairns on the side of the track marked a short detour to Mt Robert itself, and the group stopped long enough for a group photo. Continuing down the Pinchgut Track, the team plodded first through beech forest (much of original forest was burned down in an accidental fire in 1887 but has regrown after planting started in the 1960s), then grassland and scrub to reach the top carpark around 2.30pm. From there it was a 10-minute walk downwards to our cars at the next carpark.

Everyone thought the day was a winner and would go home knowing they put in a good effort.