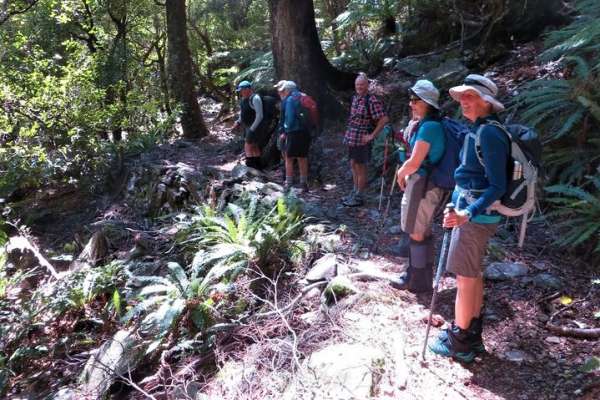 Friday was rainy and Sunday was predicted to be rainy again but Saturday the sun was shining as a group of 21 met at Havelock to switch cars for a crossover trip between Cullen Creek and Waikakaho Valley. The three high ground clearance vehicles went to Cullen Creek end as there was a ford to drive through to get to Cullensville, the site where once a gold mining town stood. Now there are just a few signs indicative of the past and green pastures where cattle grazed.

Soon after leaving the vehicles there is a creek crossing and then the track narrows as it gradually climbs, following up Cullen Creek and then climbing more steeply through a pine plantation. Looking back, in certain spots, you get good views of the Marlborough Sounds. The track heads up a ridge, now in beech forest, and then sidles in and out of gullies to reach the bush clad saddle. This is where the two groups met and exchanged car keys.

From Havelock the other three vehicles drove on to the end of the Waikakaho Valley. We parked just through the gate beyond the bridge some 2.5km from the carpark as the farm track was rather rough for our low swung vehicles. Shortly past the official carpark area, which was full of vehicles, there are a couple of creek crossings and then the track leaves the farmland and goes up at a gradual gradient through regenerating bush. It then enters beech forest.

A couple of hours up and you are at “The Village Green”. In 1888 another gold mining town, of some 200 miners, stood here. Stone chimneys and rock foundations are all that remain in this clearing. There are two mines signposted near here. We visited one that was just 100m off the main track. At the saddle people enjoyed the views back over Waikakaho Valley and beyond, from a look out point some five minutes off the track.

This track was carved into the landscape by the miners of the 1880s. There were various spots of interest on the way, like the site of a tower, from which an aerial tramway took the quartz 5km to the valley floor where it was crushed by a stamper. On the Cullen Creek side high up in the bush is an open area where some huts once stood.

Those that enjoyed the six hours on this track were: