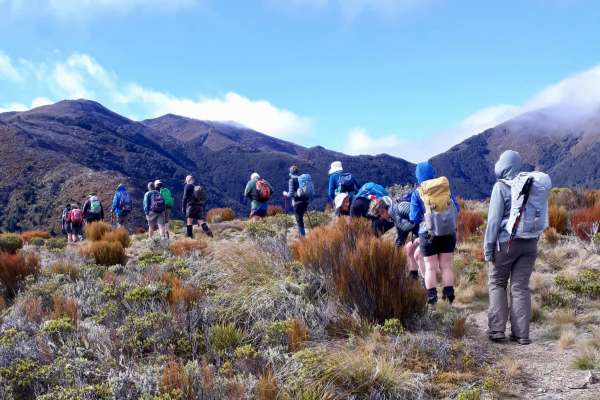 We departed Wakefield on a calm, mild morning to Inwood Lookout. The track that winds its way up through pine forest from the Wai-iti Valley was rougher, mainly at the bottom, than when I had been up a few weeks earlier, so we were relieved to have 4WD and high clearance vehicles.

Arriving at Inwood Lookout carpark (1058m) the temperature was far from tropical, so on went the layers of warm clothing. 19 trampers began at 9:15am, ascending steadily up the ridge on a good track through beech forest. Before long we were out in the open, alpine terrain where we were met with a strong, cold SW wind. We continued up until finding a sheltered spot, down over the side of the ridge, for morning tea.

It was then up the steepest, most challenging part of the track with a bit of a scramble and navigating over rocks and scree for a short time before getting above the rocky outcrop. As we ventured up and along the north ridge the cold wind dropped almost completely and we could enjoy the rest of the day in near idyllic conditions. We passed the turn off on the left that takes you to Hunters Hut and to the right to Gordons Knob.

We reached North Peak (1564m) at 11:30am. The 360° uninterrupted views were stunning including Nelson Lakes, Red Hills, Richmond Hills, Ben Nevis, Tasman Bay, D'Urville Island, Gordons Knob and Kahurangi National Park. We retraced our steps stopping just before 12 for lunch, where we were content to laze in the sun, eventually getting ourselves up to head back. It was an easy walk down, albeit taking care on the steep rocky/scree part again, returning to the carpark at 2:45pm.

Inwood Lookout is so named because of the fire lookout to watch over Golden Downs Forest. It is named after Harold Richard Seymour Inwood who purchased land on the western side of the ridge in 1910. The lookout, constructed in 1970, is New Zealand’s highest though disused now.