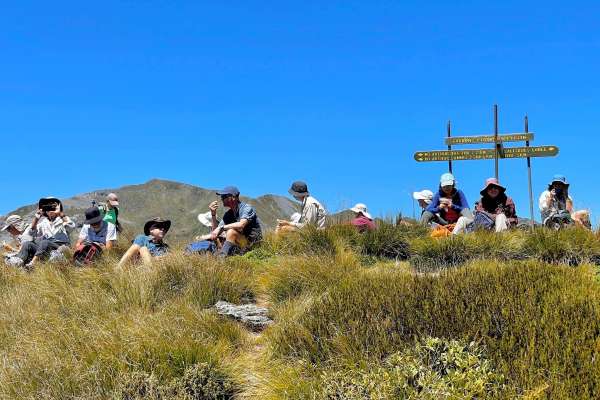 The main group met at the Badminton Hall carpark at 7.30am and with three trampers picked up along the way, we had 25 keen trampers for this trip. While there was a little light rain in the lowlands, the Mt Arthur Plateau was under a clear blue sky.  We started walking at 9am from Flora Saddle carpark, soon walking down past Flora Hut to the Clouston Mine Track. From the start we split up the large group, with a faster group soon disappearing out in front.

Our group of 15 had morning tea near the swingbridge and then headed up the mine track. On the way we heard long-tailed cuckoo and kea calling but couldn’t see the birds. We had a quick look at the mine entrance and then climbed out of the forest and onto the open tussock country in brilliant sunshine.  After a steep climb to the summit of Gordons Pyramid we met up with the faster group for lunch at the top. We had spectacular clear views to the west, north and south, but there was some low cloud over Tasman Bay.

From Gordons Pyramid the track goes up and down along a ridge crest, with a steep climb up a limestone outcrop at one point. However the weathered rock provided plenty of hand and foot holds. A few of us had time along the way to photograph some of the flowering alpine plants which will be put onto the website iNaturalist.nz for anyone to see. Along this section it was possible to see the faster members of our party a long way ahead across this open landscape.

There was a special request to find an interesting native orchid further down the track and three of us even managed to locate them but unfortunately they had finished flowering. Our instructions on the location proved accurate. The last of our group was back at the cars by 5.15 pm having taken just over eight hours for this very enjoyable tramp.