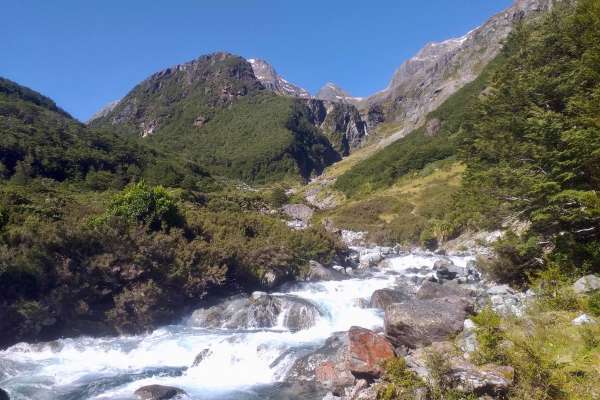 This trip was postponed a few times since mid-November because we needed a five day window of good weather. Eventually we saw our opportunity in January. Even then, we postponed by a day as a snow storm swept across the ranges depositing up to a metre of snow in places. It was a relief to finally be on our way. One group of four went in from Rotoroa and the other four went in from Kerr Bay. Each group crossed each lake in a water taxi and walked the five hours to West Sabine Hut or John Tait Hut. Despite the drizzly rain and not seeing wasps, three of us were stung on our legs by wasps.

On day 2, two from the Rotoroa group did a side trip up to Blue Lake. The other two had a rest day. Meanwhile, the Rotoiti group had a very scenic walk to Upper Travers Hut. Being only a three hour trek meant lots of time to enjoy our surrounds, including viewing the spectacular Travers Falls about an hour after leaving the hut. Upper Travers Hut is situated just below the bushline and having a clear still day we all enjoyed the scenery.

Day 3 was the day both groups crossed the saddle. There was still some patches of snow around, enough to make it very picturesque but not enough to be hazardous. There were strong wind gusts in the saddle. One gust blew me over just as I was carefully negotiating a patch of snow. At least it was a soft landing. Needless to say, we didn’t loiter in the saddle. The other group found the saddle calmer as they crossed later in the day. They had a look at a beautiful tarn. The two groups met on the Sabine side, just a bit below the bushline. From this bush edge the track has been rerouted to go straight down the ridge in the bush to rejoin the old track (as marked on maps) near the valley floor. This is to take it away from the side of an avalanche path. There were endless signs warning us whenever we entered an avalanche path.

On day 4 the Rotoiti group did the side trip to Blue Lake and beyond to view Lake Constance. Rob was able to explain all about the clarity of the lake and we admired the poster in Blue Lake Hut which shows Rob in action. After ten hours on our feet we were happy to be back at the West Sabine Hut. Meanwhile, those coming down the Travers Valley tramped the nine hours from Upper Travers Hut to Lakehead Hut, so on the fifth day they had a short day, arriving at Kerr Bay before midday.

Those coming down the Sabine endured lots of wasps. We passed at least four wasp nests but fortunately no one got stung that day. It was good to get to the Sabine Hut before the day got too hot. A dip in the lake was a good way to cool off as we waited for the water taxi. All huts were relatively busy, but West Sabine Hut was the busiest reaching capacity on some nights.

Those coming in from Rotoroa were; Esther, Arif, Jeannie and Anthea.

Those coming in from Rotoiti were; Rob, Maria (scribe), Marie and Julie.