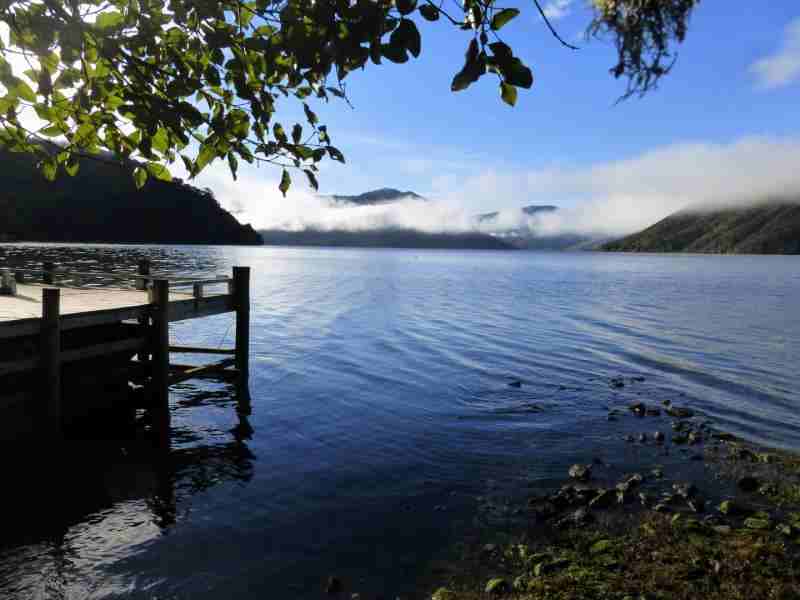 Over the long Anzac weekend, eight walkers took the opportunity of joining Jeff at his bach at Wakaretu Bay, 12km from Havelock. With a choice of a two or three night stay, people either arrived on the Friday afternoon or the Saturday morning. On Saturday, the early birds took time out on Wakaretu Bay with some early morning kayaking or rowing. Then, once everyone had arrived, we undertook our first walk: a 4½ hour looped ascent up to the local high spot of Mt Parkinson (576m). The bush track we used had been cut by Jeff and friends after many hours of toil, and though it was still a work-in-progress in places, it was well worthwhile for the views we gained. This included a silver and grey view of Havelock under the threatening dark rain clouds. We eventually made it back to our warm and cosy bach as drizzle started to set in.

After a lot of overnight rain, Sunday dawned fine with fast clearing morning cloud, so we decided to go up Mt Cawte (474m) for some viewing opportunities of the inner Pelorus Sound. The track to the summit is well maintained by the local community and starts at Moetapu Bay. It is mainly through regenerating native bush reserve, and has many steps to assist walkers on the steeper parts. There are two outstanding viewpoints, including one with picnic tables, which we utilized for a lunch stop in the warm sun. It was here we met up with Jeff and Rob, who had driven further round to the western side and come up from another car park. So we were able to follow the ridge down rather than having to backtrack the same way, thus making for a more rewarding four hours. Before returning to the bach we stopped at Cullen Point to check out the lookout, and do the easy one hour looped bush walk. On Monday, the plan was to do part of the Nydia track from Kaiuma Bay up to the Kaiuma Saddle (387m). However, Rob and Jeff preferred more excitement and decided to cut down some rather large trees around the bach. For the rest of us, it was 2½ hours of steady but easy climbing on a well maintained 6km of track. At the saddle, we had lunch. Unfortunately haze and misty cloud detracted somewhat from the views down to Nydia Bay. Then it was back down. After checking out the recent extensive and uninspiring section development activity on the northern side of Kaiuma Bay, we were back at the bach for afternoon tea and a clean-up and then finally, the hour and a half drive back to Nelson.

Overall, thanks to Jeff’s hospitality, this was a super weekend away. He knew the area, its tracks and what best to do through the day... and he even got up early to prepare porridge and a fry up for us at breakfast each morning. And, we enjoyed the company of the participants: Jeff (our host), Rob, Maria, Joy, Pat, Lesley, David W, David S (a visitor from the Auckland Tramping Club) and Ron (the scribe).