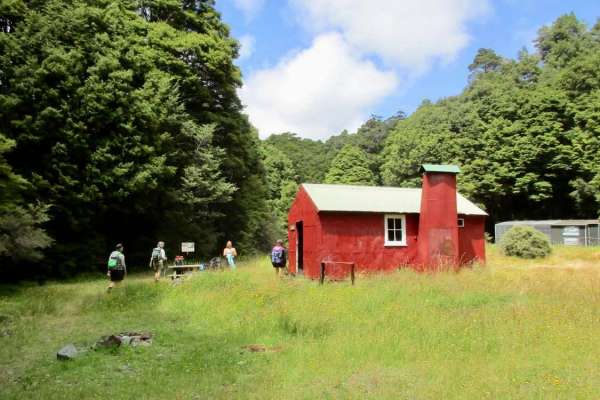 The Wainui Track could be the least used section of track in NZ’s most popular national park, but is still worthwhile visiting. On a partly cloudy day, eight trampers headed off in two carloads. At the Canaan turnoff the two drivers transferred to the other car so they could return in their own vehicle at their end of the track.

The Birds Clearing group continued on past Takaka and turned off at Clifton onto Bird Road. This gravel road snaked uphill for 9km to a small carpark at 670m, at the high point of the road, two hours from Richmond. The views west across Golden Bay were simply magnificent. We followed a farm road climbing gently for 30 minutes before entering native bush. The track then undulated along the Pikikirunga Range for one hour before veering left and descending steadily to the Wainui River. After 30 minutes we reached the first crossing of the river where we met the other group who started from Canaan and a good opportunity for lunch together.

After lunch and having exchanged car keys, we carried on beside the gently flowing small river. The next shallow river crossing was after 30 minutes and just next to the four-bunk Wainui Hut situated in a good clearing. After a brief stop here, it was a steady climb up to Wainui Saddle then along the track skirting the limestone landscape of Canaan Downs and down to the carpark at the end of the Canaan Road. This was less than two hours from Wainui Hut and had taken us five hours altogether, completing a nice crossover trip.

As it was only 2.30pm, the Birds Clearing group decided to head in for 45 minutes to Harwoods Hole as some had not been there before. We also detoured up the side track to the lookout over Gorge Creek. The Canaan group had also taken five hours for the trip and stopped at the Woolshed Café back at the Canaan turnoff for refreshments, waiting until the Birds Clearing group finished the extra trip to Harwoods Hole.

The Canaan group was Rob, Christine L, Donell and Dale.