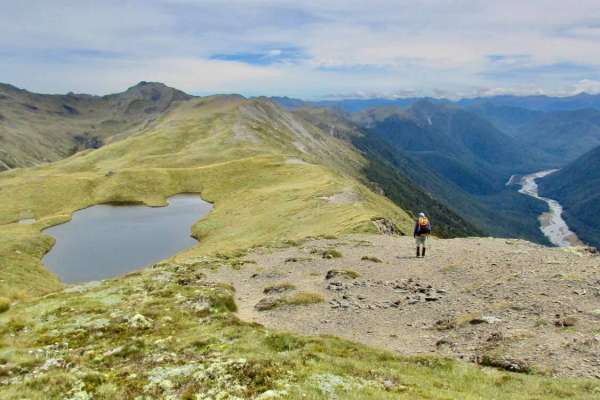 Lewis Tops and Brass Monkey Bivvy have been on my wish list for a long time. The weather forecast for Waitangi weekend was looking good: no rain or strong winds, particularly important for a trip in alpine and exposed terrain.

We left Richmond on Saturday at 7.30am with five people and two cars, and stopped for morning tea at the Maruia Falls. We continued our route till past Springs Junction and left one car at the layby one kilometre east of the Rough Creek Track on SH7. The layby is used for sand and gravel storage and we parked the car behind the storage unit, out of sight. We all fitted snugly in one car and drove to the Lewis Pass. We were apprehensive to leave the car at the Lewis Pass carpark for two nights because it is an infamous place for car theft. Therefore I drove back to Maruia Hot Springs to park the car and it didn’t take long to hitch a ride back to the pass.

We were on the track by 11.30am, following the road contour at first and then meeting up with the main track to climb up steeply to the bushline. Here we stopped for lunch enjoying the first of many alpine views. From here on there were no markers anymore until we reached Rough Creek Track on Monday. There was the odd cairn and in places a track was formed from usage by other trampers. We had the recorded route from Jo and Chris on our phone and I had also downloaded a route from the Wilderness magazine. New technology certainly helps when there is no signage!

After lunch we climbed up a little bit further to the Lewis Tops, following the wide ridge and passing the first couple of tarns on our left. We decided to drop down to the east side where we could see a basin surrounded by Mt Technical and The Apprentice and a beautiful freshwater stream. We set up camp, leaving plenty of space in between the tents not having to worry about snorers. David and Eric explored the climb to the saddle for the next day and saw other campers at the tarns on the side of the saddle, which confirmed we made a good choice. We enjoyed a sheltered, quiet night on soft tussock grasses.

There was no rush on the second day because we only had to go a short distance to Brass Monkey Bivvy. Just after 9am we left our campsite and climbed up to the saddle between The Apprentice and Lucretia. From there it was a bit more route finding but luckily we saw two other trampers on the ridge of Lucretia (1643m) in the distance which confirmed the way we were supposed to travel. It looked a bit daunting to some of us, but once we were on the route it was very doable. We dropped to another saddle and climbed towards the next unnamed peak at 1602m from where we started the downhill, arriving at the bright orange Brass Monkey Bivvy by lunchtime. The bivvy is quaint, it sleeps two, but the bunks are small and narrow. It was a bit windy, so Arif and Robert opted for a bed inside. Well, for Robert it meant sleeping diagonally on the floor, to fit in! It was good to have the shelter though, and we all used it to cook our meals. There were several tarns by the bivvy, which we used as a water source.

There is a little brass monkey figurine on the wall in the bivvy and of course we discussed the meaning of the name. Back home, Robert looked it up and the expression "Cold enough to freeze the balls off a brass monkey" means extremely cold. Apparently, a brass monkey was a plate on a warship's deck on which cannon balls were stacked. In very cold weather the metal contracted, causing the stack to fall down. We spent a leisurely afternoon around the bivvy, made a short side trip and enjoyed the scenery. Later in the day a party of four extremely capable kids and two mums joined us, camping at one of the other tarns.

The night was a lot windier and therefore colder than the first one, and when we got up at 7am we were in the clouds and couldn’t see much. I was pleased to know we had the route on the phone, but luckily by the time we were ready to go, the clouds started to lift and we were on our way. The route sidled around the basin, staying around a similar contour for most of the time. It included several sections of rock hopping and there was the odd cairn to guide us. Most of the clouds had lifted and it was great to have more views, knowing that soon it would all be over. We climbed up to the ridge from where we could look into the valley towards Lake Christabel Hut. On the ridge we joined Rough Creek Track and from here it was a straightforward downhill. We crossed Rough Creek three times but water levels weren’t very high.  Back at SH7 it was a short walk to the car.

Overall, the route was fairly easy to follow but only recommended in good weather and with the necessary homework before departure. We had been looking forward to soak our feet at the hot springs café, but unfortunately it was closed, so it was hot chips at Springs Junction instead!

Stats of the trip

Those on the trip: Arif, David S, Robert, Eric and Esther (trip leader).