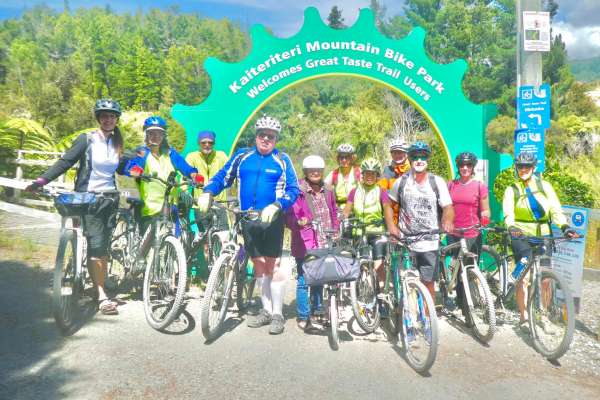 Twelve bikers including four visitors met at 10am at Talleys carpark for something different than what we would normally do. Heading along the estuary trail opposite the sandspit, it was easy going and with the tide nearly in, it made it even nicer. All we had to worry about was avoiding the odd walker. At least three of the group had e-bikes but we never got too spread out. We biked a bit alongside the main road, then did a right-hand turn and after about 40 minutes parked at Riwaka for a morning tea stop. We watched a couple of women playing croquet on the nearby field (very technical).

Continuing forward alongside the main road, we passed apple and kiwifruit orchards and hop gardens, then biked over the suspension bridge one at a time. Great coastal scenery was shared, then there was some uphill and downhill and a sharp turn or two and before we knew it the group arrived at the Kaiteriteri Mountain Bike Park. Some pushed their bikes at times and some (myself included) were a little wobbly on the sharp bends, but we had to go slow as it is a two-way track.

Arriving at Kaiteriteri around 12.20pm we were lucky enough to leave our bikes at the campground as one of our visitors had a campervan there and there was plenty of room on the lawn. The place was busy, especially at the bridge end, with youngsters jumping off and families nearby in the safe swimming area, also kayaks and stand-up paddleboards with boats in the main bay. I gave the group 45 minutes for lunch, so some went to the café, some took a wander around, some went for a swim (Helen, Colin, Jenni and Sue), while I sat on the beach and had a yarn with Toni, Helen and Di.

Heading back seemed quicker and easier. The lead changed several times and when we got to Motueka we changed direction with our party going along Thorp Road to join Wharf Road and finally the port estuary trail, passing the cemetery to come out at Talleys carpark at Port Motueka around 3.30pm. Di was disappointed the café there was not open, but we want to thank her for the fine photography. These bike trips are a good option and we hope to do another one in the spring time. Participants were: David W (leader and scribe), Julian (co-leader), Ian, Lynley, Toni, Helen, Miang, Colin, Jenni, Di, Christine and Sue.