Light rain but a pleasant time 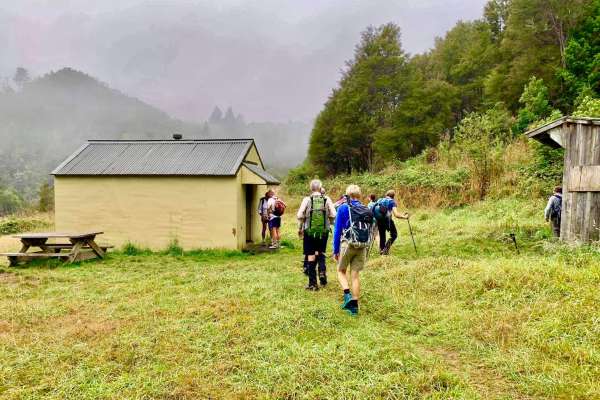 The dry heat and blue skies promised earlier in the week didn’t eventuate, so today’s trip was tramping-only as opposed to a tramp with a swim afterwards.  At 8.40 am, 15 of us set out from the Hacket carpark in heavy cloud only to stop again at the swing bridge which DOC now recommends only one person cross at a time. It does take a while to get 15 people over individually and on their way again though. DOC has told the club the cables are not strong enough but it is planned to be repaired.

By the time we arrived at Hacket Hut the humidity was high and the rain swooping low. Some sat in the woodshed and took up more room than the shed had wood in it – not because of the size of them rather because there was so little wood in it. Others of us crammed inside to chat with the energetic couple we met cheerfully doing the Te Araroa trail south to north, Starveall Hut to Middy Hut via Rocks Hut in a day. Ouch! Youthful energy or foolishness, you decide.

We took the high-level track to Browning Hut which was steeper than the several members of the party who hadn’t done it before expected. Once again, our trampers occupied a woodshed to eat in at an hour-long lunch stop adjacent to Browning Hut, while the hardier ones braved the light rain falling on the picnic table. The rain had been recent and light, so I felt it was OK to take the low ‘river route’ on our return downstream from Browning Hut. As planned, we bypassed Hacket Hut and met up with the Hacket track 15 minutes below the hut. From there we continued back downstream on the same track as we had come up. While the track is far from difficult, it is important to watch where you are putting your feet as there are places where the track is narrow and slipping away at the lower edge. Those edges are high above the rocky stream. For that reason, I suggest being wary of taking young children on it or even older children who talk rather than watching where they’re treading.

Our party members arrived safe and sound back at their cars by 4.10pm after a pleasant time out with great company. Those who came were Alison (leader and scribe), David W (co-leader), David M, Colin, Gael, Helen, Julian, Ian, Merrick, Paula W, Robyn, Stephen and Sue along with visitors Jamila and Julie.