A rather cushy trip! 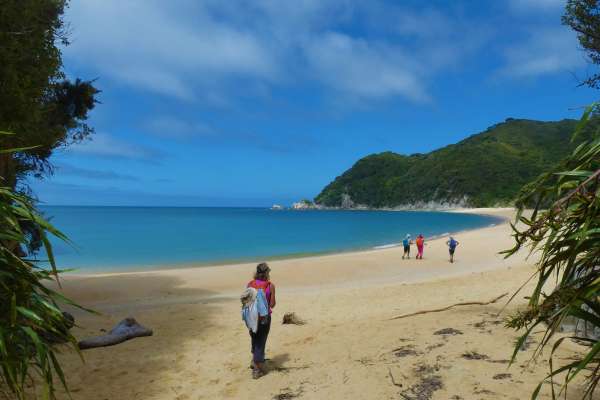 Our car arrived at DOC’s Totaranui Beach campground on Friday afternoon just before the office closed for the day, and we were very pleased to be allocated an unofficial spot where all the group could camp together. The other cars gradually rolled up, and out came the luxuries of car-camping - large tents, pillows, chairs, tables, chilly bins of food and drinks.... Sweet!  We had a great set-up with the beach a minute’s walk away - we just had to keep an eye on our food, what with the prowling wekas, paradise ducks and pukekos. The tally of WTC campers in our enclave ended up at 13, being 12 of the fairer sex and one very brave bloke.

Saturday morning dawned overcast, but that was absolutely okay as the first item on the agenda was an uphill stretch on the Gibbs Hill Track. By the time we were on the Inland Track overlooking the Wainui Inlet, the sky was obligingly blue. Then it was across and down to the historic Whariwharangi Hut for a leisurely early lunch, followed by the first of many beaches and swims.

From Whariwharangi Bay we did the detour to Separation Point, where Project Janszoon is (fruitlessly so far) hoping to establish a gannet colony. Looking down at the lighthouse, the concrete decoys and the loud-speaker of bird calls are very convincing ... until one cottons on that none of the birds move. We did however spot numerous fur seals basking and splashing around on the coastline below

Next we joined the Coastal Track, and the gentle roller-coasting track led us through three more beaches - Mutton Cove, Anatakapau Bay and Anapai Bay - all beautiful, golden-sand and deserted. The gig is that the track deposits you at one end of the beach, you walk along it, and then at the far end the orange marker points you bush-ward once more.

The group started to break into subsets as the swimmers and non-swimmers peeled off. Most of us ended up back at our cushy campsite eight hours after setting off that morning. After dinner of more non-tramping-food delights, we then topped the day off by lighting a bonfire in the nearby fire pit and enjoyed a lovely evening sitting around the flames.

On Sunday morning down came our tent village, cars were relocated to the day-park, and we headed south on the Coastal Track to Awaroa. The weather was once again early-morning cloud burning off to a bluebird day.  First off was a climb up to Skinner Point for a great view looking down on Totaranui Beach, followed by two more beaches - Goat Bay and Waiharakeke Bay. They were a repeat of yesterday - beautiful, golden-sand and deserted. What a paradise we live in!

We timed it nicely to be at the Awaroa Inlet for the low tide at 11am. The estuary is about a kilometre across and can only be crossed approx two hours either side of low tide. It was at-most knee deep in a few patches for our crossing, with sandals recommended  because of the sharp shells underfoot. We enjoyed an early lunch at the superbly located (absolute waterfront) Awaroa Hut, then turned tail and headed back by the morning’s route to our cars.

Following second-lunches and more swims, we reluctantly headed home, with some of the group stopping off at the lovely Wainui Falls en route.