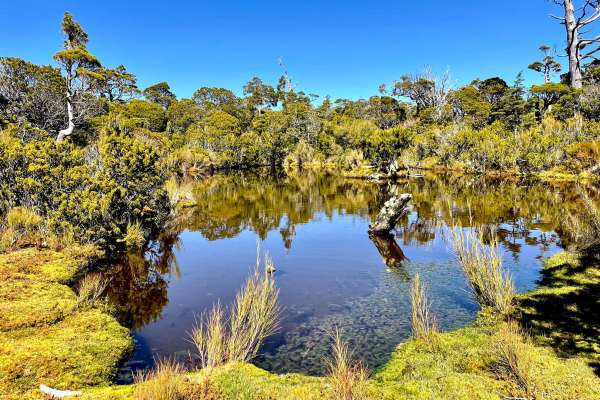 Today’s trip  was an honest day tramp.  In fact, it was surprisingly how many of our 14 strong party were heard to comment they were sure that the distance between Maitai Dam carpark and the lakes stretched upwards further, every time they walked it.  We had a glorious autumn day which was hot enough that were glad for the bush cover during the afternoon.

Colin and Jeni had a different experience to the remaining 12 in the party.  The rest of us were overtaken at vast speed somewhere during the first 40 minutes when the track is a shared forestry road.  No Colin and Jeni were not 4WD’ing.  A locked gate prevents that sort of cheating.  However, it’s possible to get mountain / e-bikes around the side of the gate.  That’s what they did.  I suggested they bring victory flags to wave as they pass when we find other tracks suitable to partly bike and partly walk.

We left the carpark at 9 am.  Colin and Jeni met us just before the track turns into the bush at Rush Pool.  The non NZ’ers in our party were surprised to find a rush-filled wetland rather than a clear water-filled pool.  The climb from Rush Pool on is consistent and crosses the mineral belt.  There’re only small patches of steepness.  One of our number was heard to say on the return journey “Did we really come up this?”  Really, we all did, in time to get to Dew Lakes for a leisurely 1 pm lunch.  It’s worth the scramble through the lakes area to find the large open seating area which yields a glimpse of the water in the Marlborough Sounds and an expansive view further across the Richmond Ranges including to Mt Royal where some others from WTC were heading this same weekend.

The trip back was considerably quicker meaning we were back at the cars by 5 pm having  experienced the buzz which comes from the sense of accomplishment; achieving what was planned regardless of twinges of discomfort which are quickly forgotten.

Those who came were Alison (leader and scribe), Anne, Colin, Jeni, Jo, Julian, Marian, Mary, Merrick, Miang, Sue and Terri along with visitors Rob and Tony.