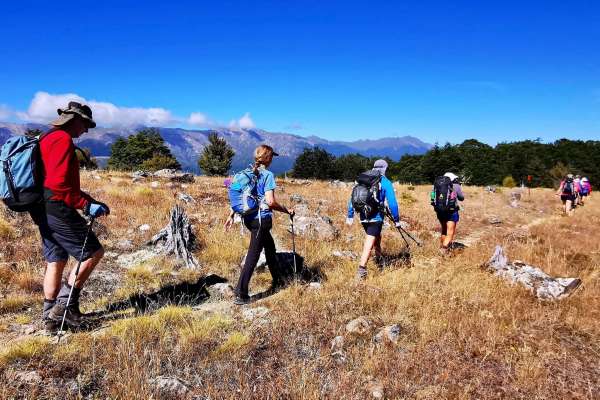 A very brisk pace was set by a group of eleven trampers departing from the Red Hills carpark, knowing that we had a full day ahead of us. After only 370m we reached the junction of the new Wots Up Doc Track, the track we would come out on later on. But we continued along the Red Hills Track with some of the group diverting along a new winding section of track, while others wanted to carry along the rougher but more direct old track. The tracks re-joined and we then explored the old cobb cottage on the edge of farmland. From here it was steadily uphill for 450m on an old vehicle track to Red Hills Hut for our first break after 1¾ hours.

Westward from here it was an easy climb up into the bush to a small knoll then along to the main highpoint of Maitland Ridge at 1202m. Before long we emerged onto a clearing with an outlook southwest, but we continued on a few more minutes to the best viewpoint, nearly halfway along the ridge with magnificent views across to the Raglan Range and down the Wairau Valley.

After our lunch at the lookout there were two or three more small saddles and highpoints to go over before a long steady climb up the ridge, emerging out of the bush and onto the Beebys 4WD road at about 1300m. The Maitland Ridge Track along from the hut had taken us 3¼ hours.

We descended the Beebys Road for one hour then turned off onto the new Wots Up Doc Track, 800m up from the gravel Tophouse Road. This turnoff is not yet signposted with any DOC sign on the roadside, but there is a MTB Trails Trust sign on the track just off the road. The nice wide track descended steadily in about 20 zigzags then cut across the hillside with a couple of stream crossings of Six Mile Creek to emerge back onto the Red Hills Track, then finishing back at the Red Hills carpark. The new Wots Up Doc Track had taken us 1¼ hours and the whole circuit was completed in 7½ hours.

Everyone seemed satisfied with their achievements and the excellent new track topped off a great loop on a nice fine day. The MTB Trails Trust have future plans for two other tracks branching off this circuit which could also give further tramping options.