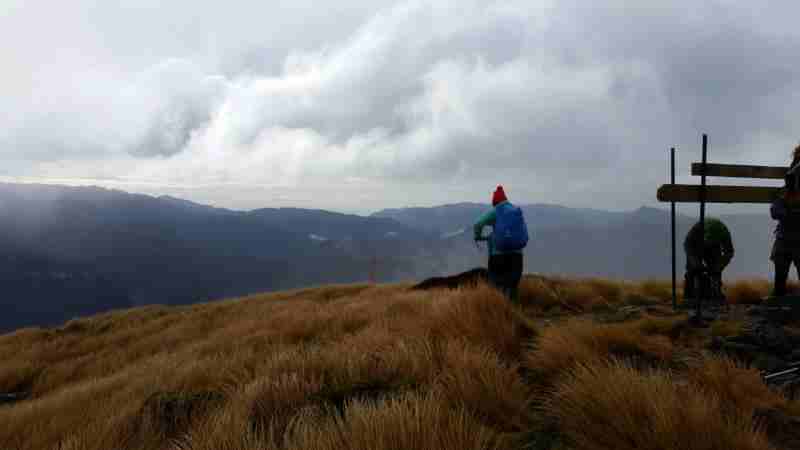 hirteen trampers in fine fettle departed from Flora carpark taking one hour to reach Mt Arthur Hut. The track was being beautifully resurfaced and had barely any roots visible, making for very easy going. Directly in front of the veranda was a two metre high mountain of dirt ready for spreading on the track. From the hut we headed up the open ridge amongst the magnificent tawny tussock. At a junction part-way up the Mt Arthur Track we diverted onto the Gordons Pyramid Track. A steep descent was followed by a meander through the marble jumble of Horseshoe Basin with its tomos and outcrops. We emerged from the basin and climbed a ridgeline including some unwanted dips. Cloud from the west had built up and slowly covered the summit and a cool wind was blowing. We didn’t linger long at the summit because of few views and little shelter so we descended to Clouston’s Mine just below the bushline.

Some valiant ones with torches explored into the horizontal shaft with some old wooden tram rails still intact. The mine was excavated for over 100m by Mr RE Clouston in an unsuccessful search for gold. We descended below the mine along the well-benched track, cut in 1911 for the mine access, eventually joining up with the Flora Track above Flora Stream. It was steady going on this wide track for one hour to Flora Hut. Recent renovations to the hut by Nelson Tramping Club volunteers include complete lining of the interior, installing fire bricks, a fire surround and a water pipe to an outside tap. This all makes for a much more pleasant place for those that stay here overnight. From the hut it was a short half-hour amble over Flora Saddle back to the cars for a full eight hour day and a complete circuit. The group was Robert, Maria, Rob, Andrew, Joy, Mary, Jill D, Chris, Jo and newcomers Dave, Viv, Daniel and Jennie.