Murder & Mayhem on the Maungatapu 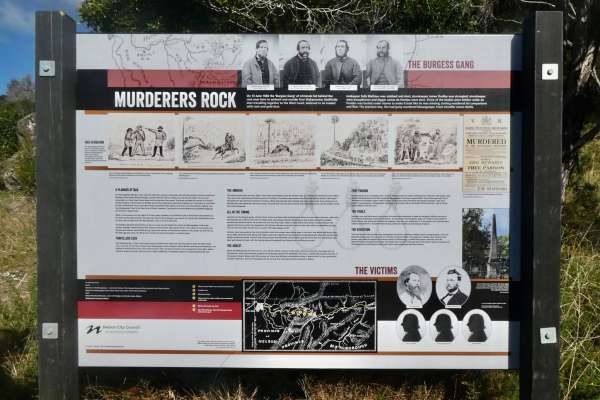 In June 1866, at a place now known as ‘Murderers Rock’ on the Maungatapu Road, five travellers were ambushed and savagely murdered. The culprits were a group of four, all with previous criminal records, known as the Burgess Gang. The road was the only route between the goldfields near Canvastown and Nelson, and the gang hoped for a large payday. Instead they netted a total of only 320 pounds. One of the gang informed on the others for a 200 pound reward and immunity, and the other three members of the gang were hanged.

On a sunny Mayday in 2021, all was quiet and serene on the Maungatapu Road. It is closed to vehicles, the access road to Nelson now routed over the Whangamoas, but is open to hikers, mountain bikers and dirt bikers. As the two road ends are over an hour’s drive apart, the trip was organised the as a crossover, with eight people (two cars) starting at the Maitai Valley in Nelson, and a further eight starting at the Pelorus Valley.

To save Saturday morning carpark chaos - whose group am I in, what car am I going in, what car am I coming back in, which cars get what fares - the leader sent out a detailed email in advance, and the meetup in ParuParu Road was as smooth as silk.

At 11.45 both groups met up on the south side of the Maungatapu Saddle for the key swap, and the leader decreed an early lunch. 45minutes later after food, a yarn, and for some a snooze, the two parties waved goodbye and continued on their ways.

When the southbound group arrived at Murderers Rock the leader suggested a reenactment of the infamous crime, but as everyone wanted to do the murdering, rather than being stabbed, strangled and/or shot, this did not eventuate. There was however unanimous enthusiasm for a post-walk coffee/ice cream at the Pelorus Bridge cafe before driving back to Nelson over the Whangamoas.

Lesley G also joined us for a there-and-back from the Maitai to Murderers Rock.