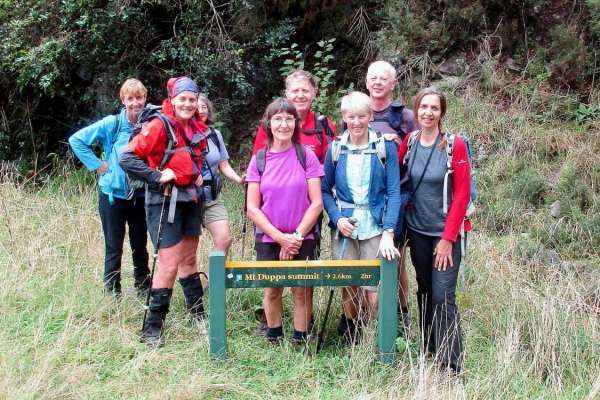 The group headed for the northern end of the Bryant Range, turning off onto a well-signposted forestry road 5km past Whangamoa Saddle. We travelled 4km up the forestry road and parked at a skid site then walked the last 2km of rougher road. The extra 25 minute road walk was a welcome warm-up, as the start of the track itself begins steeply.

Underfoot conditions were good despite heavy rain the previous day, but there were two large windfall trees to negotiate, taking a little extra time. One hour up the track we had to thread through an impressive section of rugged limestone outcrops and which was the steepest part of the track. After this the gradient eased slightly and we soon emerged from the bush to the 1143m summit after 2¼ hours from the cars.

There was very little wind however cloud prevented any outlooks. We continued about five minutes further along the ridge to some large rock outcrops which we clambered up onto for our lunch while the sun peeked through briefly.

We returned back down to the cars in just over two hours and were home by mid-afternoon. Despite not getting any views the group enjoyed this area of splendid bush for a short and sharp trip, close to Nelson.