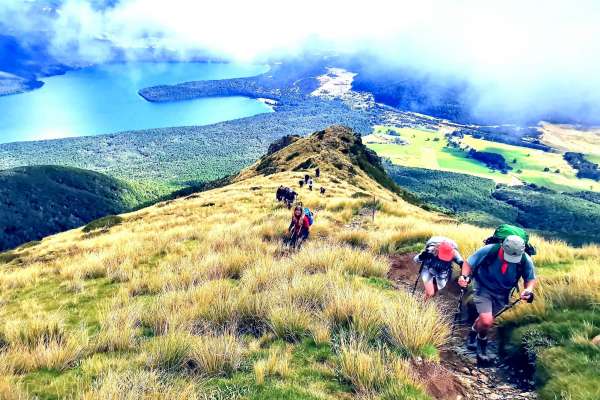 The autumn day dawned well on the northern St Arnaud Range and sixteen of us from all over the district assembled at St Arnaud to explore it. We shuttled the cars so that half of us could go up a trap line near Beech Hill Rise, along the ridge, and down to Kerr Bay via Parachute Rocks, while the other half did the same trip but in the opposite direction.

The grunt up the hill was rewarded by a pleasant stroll along the ridge, where we all met for lunch in the middle.

We were expecting it to be cold on the tops, and we were rewarded by sleet flurries, but fortunately we had plenty of warm clothes, the wind wasn’t too strong, and the sun sneaked through. Six and a half hours got us from one end to the other, with the reward of ice creams for some on the way back to the bustle of our every-day lives.