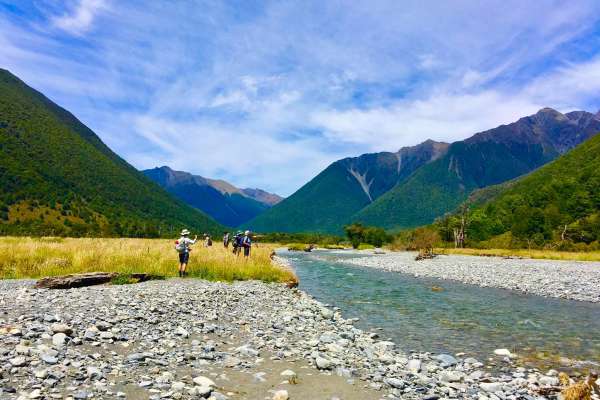 A large group set off from Richmond on a very fine morning. We were split into two groups so that we could manage the numbers as a crossover. The logistics worked well and we set off along the Lakeside Track, pausing at Whiskey Falls for morning tea and then on to Coldwater Hut where we had some lunch.

Shortly after lunch Julian had a bad fall, splitting open his shin. Julian's shin was attended to and Rob and Ian accompanied him back to Coldwater Hut. The other group were having lunch there so Rob walked out with them. A random boatie took Ian and Julian across the lake, then Ian drove Julian homeward.

Meanwhile, the rest of the anticlockwise group continued on to Lakehead Hut. The river crossing had changed to further upstream as it had washed out lower down, forming a big bank. After a break at Lakehead Hut, we walked on to Kerr Bay where we  met up with Rob. The circuit had taken around seven hours.

We found out later that Julian had his shin attended to at Accident & Emergency and because of the nature of the wound, he had to rest his leg for several weeks. Thankfully, it has all healed nicely and he’s out tramping again.