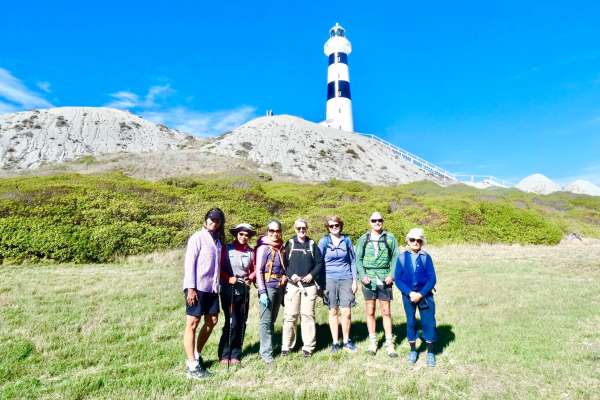 Saturday:  Five of us travelled down to Havelock arriving there a little before midday to have lunch at a nice picnic table overlooking the waterfront.

Then a drive along the Queen Charlotte Drive to walk part of the Link Pathway. This 42km pathway which links Havelock and Picton was started in 2005, driven by the community and overseen by the Link Pathway Trust. The final stretch was completed earlier this year.

We chose to do the bit between Ngakutu Bay and the Grove which is probably the best part. The tide was in and the water was calm, and we spotted kayaks, paddle-boarders and fishermen. It took the group a little over two and half hours to do the trip and return. It’s a well graded track through native bush and great headland sea views.

We got to Picton around 4pm and checked in to our private dwelling (friend Paul’s place). After being joined by another, our party headed to the busy RSA for a nice meal and beverages.

Sunday:  Our eager walkers left at 8.30am for the one hour drive to Marfells Beach, and with the high tide in the afternoon, we didn’t want to get caught out. The group was seven now as another member was with us for today. The walk is from the eastern end of Marfells Beach to the Cape Campbell lighthouse.

We started walking around 9.45am along the coast in a stiff breeze. There were quite a few people about, beach buggies, families and walkers like ourselves. Since the 2016 earthquake the coastline has been uplifted considerably making it actually quicker to get there. Ambling along we arrived at the turning point at the excellent information board at the bottom of the steps. The only hill today was the steps to the lighthouse. It was very windy up there and although the view was good we did not linger too long.

Lunch was taken out of the wind, at the bottom on the grass. We were entertained by seals putting on a show for our photographers. There are some nice private cottages nearby which would make a good weekend provided there were other walks to do. Heading back the tide was coming in but this was no problem and on the drive back we visited the Saltworks and the sinking concrete bridge. The evening meal was various takeaway options.

Monday: We planned to do the Snout Track with our numbers back to five. Starting at 9am from our accommodation, the team walked passed the marina and yacht club to climb the track to Bob’s Bay and it didn’t take long to get views of Queen Charlotte Sound. Arriving at Bob’s Bay for morning tea we noticed some kayakers gentling paddling on the calm waters. Upwards and onwards to join the road and a walk of about 200 metres to join the main Snout Track.

From here there are various mountain bike tracks crossing over, so one has to keep a good lookout. In the bush again with occasional glimpses of the coast, the next goal was the Centennial Lookout and information board. Most people turn back from here but we are purists and wanted to go the end. Another 30 minutes on the downward and we reached the Snout Head picnic area. The group lingered here for a while and I spotted a track to get to the water’s edge but alas no, there was a wasp nest blocking the way. So it was back via a mountain bike track to the road at a swift pace where we met Paul (our host) for lunch.

The troupe took a different way back via the Waikawa Track and the Victoria Domain (a ride was offered), then we were down to only two people. Up a short sharp hill, we passed the reservoir, and dropped down to the marina and finished by about 2.30pm.

An excellent relaxing weekend, great weather, good company and our host Paul was a top man.

Those out and about were: David (leader), Di, Anne, Miang, Val, Liz, and Julie (visitor).