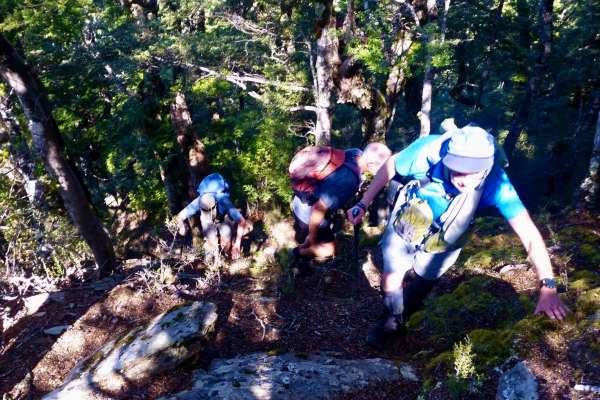 On the weekend of 13 and 14 March four trampers did a postponed trip to Mt Royal. The weather forecast was looking good this time and we were expecting good views.

We arrived at the Onamalutu campground on Saturday evening, to be able to make an early start the next morning. We enjoyed a fabulous starry night and were all wrapped up in our warm layers early in the morning. It was hard to imagine, we would soon be sweating in T-shirts and shorts! We accessed the Mt Royal carpark from Northbank Road, turning off at Fabians Valley Road, which doesn’t require a 4WD vehicle. There is also a good camping spot at the carpark if you take water with you, but you may get an early wake-up call from hunters.

The first hour of the walk is along and through the Quartz Creek, because a large part of the old track has been washed away in a storm. Look out for orange markers. You could take an extra pair of shoes or wear high gaiters if you want to keep your feet dry for the climb. The river levels were fairly low, but it is probably not a good tramp to do after heavy rainfall.

After leaving the river we started climbing on the spur, steeply in places, with some rocky outcrops to climb over, but with no steep drop-offs. We already got some nice views into the Wairau Valley, towards the mountains in the east and the North Island. It was a very clear and sunny day and by then we WERE in shorts and T-shirts.

The spur takes you to a high point at 1198m, where you turn northwards onto the ridge to Mt Royal peak at 1365m. One of the group decided to stay here while three of us continued along the ridge, which is still in the forest, and only the very last part of the climb is out of the bushline. Here we had our late lunch while taking in the expansive views.

We returned the same way to the carpark and completed the trip in nine hours.

Things to consider: there was no water on the climb and there were lots of wasps. Total elevation gain of 1200m and total distance 16.5km, club rating: Hard.

Those on the trip: David W, Arif, Eric, Esther (scribe).