In & out in the nick of time 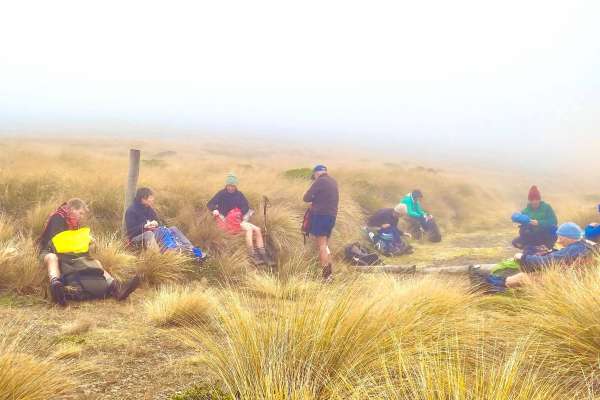 Saturday was the forecast to be the first of five wet days after an unseasonably hot and fine week. We decided to go on our tramp anyway. We wanted the satisfaction of knowing we’d been tramping at the last possible moment before the rain set in. It turned out to be a good call.

Twelve of us set off at 9am from the Beebys car park which only has a small, low level DOC sign to it, soon after ‘Anything Mechanical and More’ on the left when driving south on the Korere-Tophouse Road. Reaching the Tophouse Road itself, means having driven too far.

It was so dry underfoot for the couple of hours we were climbing up the bush track to where it joins the 4WD road coming up from nearer Tophouse, we were grateful that there’d soon be rain and plenty of it. We enjoyed seeing so many different varieties and colours of the fungi close to where we were walking. That’s the reason for choosing to do this tramp in autumn. Some had more photo stops than others. Marian danced like we’d never seen her dance before on finding a patch of the delicate royal blue species she’d been hoping to locate. One of our number was less fortunate. He pulled a thigh muscle as we reached the 4WD road. He still wanted to stride out boldly regardless. The mist however, which was rapidly advancing towards us, put pay to that idea. Instead, we used a Smart phone app to get us as near to Beebys Knob as we could while still staying on the road. The mist curtain drew itself back just for a few moments so that the first timers could see the transmitters on the knob. We had a brief lunch stop then headed downwards.

Back at the junction Karen and Maria escorted our patient down the 4WD track which was quicker and meant that had he not been able to walk the full distance, someone could have driven up to collect him. That of course would have been impossible on the bush track which is steep in places and occasionally has tricky footholds. Rob moved faster than the rest of us through the bush and had sorted the transport to collect the other three by the time we arrived back at the Beebys carpark at 3pm. We were pleased to have been out for the walk and to have beaten the mist down the hill.

Those who came were Alison (leader and scribe), Marian, Anthea, Bernard, Helen, Ian, Liz, Karen, Maria and Rob along with visitors Kerry and Lynley.