Perfect with a capital P 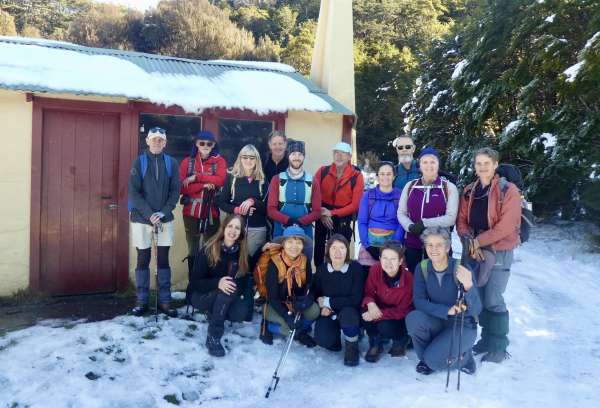 After a month of rubbish weekends, it was a delight to see a fabulous forecast for our scheduled Saturday climb of Mt Lodestone. Bright sunshine and no wind, following on from a big dump of snow earlier in the week. Lots of other people obviously thought so too, and 17 enthusiastic trampers signed up for the adventure. We were in for a treat!

Setting off from Flora Saddle at 9.30, we immediately headed steeply up through the forest. It wasn’t long before we were in snow, which gradually got deeper as we climbed higher. Up, up, up, with some rocky clambery bits and some rather icy patches, until we were out of the trees. Then we romped along on the final open snowy slopes to the radio mast on the summit of Mt Lodestone (1462m). Here we had a generously long break, drinking in the fabulous panoramic 360-degree views. It wasn’t cold - the sun beamed down from a cloudless blue sky, there was no wind, and we were all well rugged up.

Then it was time to tackle the other side. It’s actually more difficult going down steep snowy/icy bits than going up. Once off the slick rocky sections, the snow-laden forest following was also quite slow going, but at one point it was lovely to hear lots of birdsong from a rowdy posse of Korimako and Tui. Four hours after leaving the cars we arrived at Flora Hut, squatting solidly in its snowy clearing, for a late lunch.

After a group pow-wow at Flora Hut, it was decided not to follow Plan A which was to climb up the track behind the hut to do the loop to Mt Arthur Hut and coming back down the main track. Being behind schedule (we were much slower this year than last, due to the snow and our long break at the summit) meant we could well run out of daylight, and intel from other walkers indicated the route was quite icy in places. So instead we had a leisurely lunch and then wandered back across towards Flora Saddle, along the way passing an impressive array of icicles lining the track.

At the track intersection we engaged Plan B and headed up the main track towards Mt Arthur Hut, knowing we wouldn’t get all the way there and giving ourselves a turn around time of 3.30.  The track is wide and friendly, so it was a nice way to round off the day. By 4.30 we were back at Flora Saddle and in our cars heading homeward bound.

Although not all our planned route had been achieved, it was a good day. We’d knocked off Mt Lodestone in winter, and had enjoyed the most Perfect (with a capital P) of days in the great outdoors.