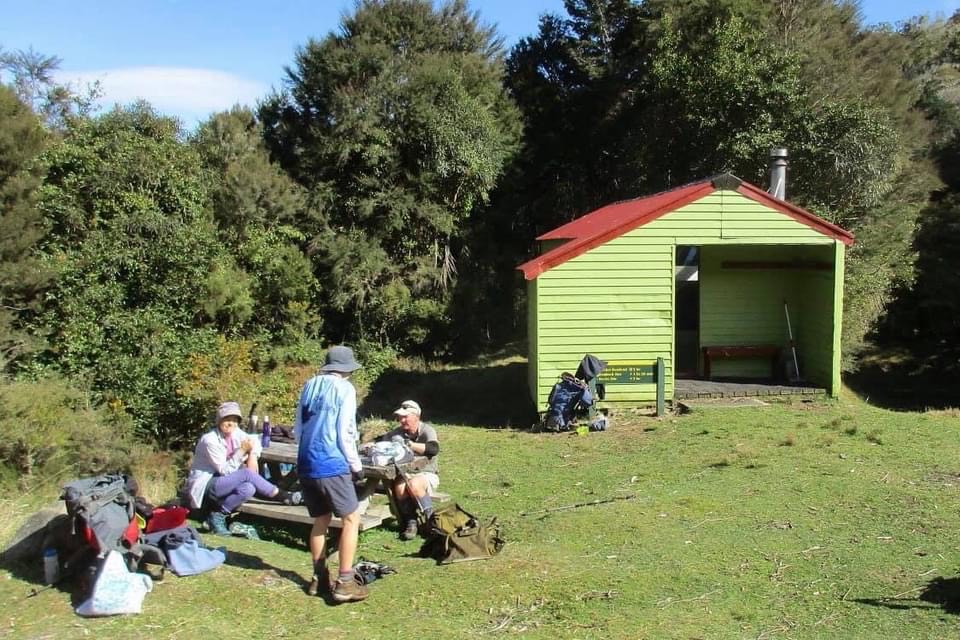 Eleven trampers met in Richmond on a fine day with the drivers exchanging cars to start a crossover. One group headed for the Maitai Dam carpark and the other party went to the Hacket carpark in the Aniseed Valley.

It was a straightforward walk up the Hacket Valley, turning off before Hacket Hut onto the Browning Track. Several shallow river crossings were needed before the gradient increased on the trudge up to Browning Hut (see photo) after 2 hours and 20 minutes from the start. After a stop here it was a steady then steeper climb up to Totara Saddle taking a further 30 minutes. At the saddle we turned off onto the track along the Bryant Range heading for Rocks Hut. After only 10 or 15 minutes the gradient eased as we reached the ridgeline. A few obstacles were encountered with four large windfall trees and several patches of small branches across the track on the range.

After about an hour from the saddle we emerged from the bush onto a section of mineral belt with only shrubs and no trees due to the high level of magnesium in the soil. Expansive views were had from the Richmond Range in the east, across to the Arthur Range in the west. This area of mineral belt contained several oddly shaped tors and rock outcrops making for a special landscape. After 30 minutes we re-entered the bush and climbed up to the highest point at 1031m through a large section of cleared windfall from several years ago.

There were eight highpoints altogether, but the track bypassed around most of them, finally descending to the hut after a long day of 8¼ hours.

The other group went from the Maitai Dam up the South Maitai and over Dun Saddle to the hut, taking 6 hours.

The number of trampers arriving at the 16-bunk hut grew during the afternoon, with the final groups coming in at dusk, bringing to a total of 29 people. Four of us were glad to have brought tents and made us of them at a nice camping area one minute’s walk behind the hut. The bench bunks fitted in a few extra people as well as the use of a couple of mattresses on the bench seating and also three people on mats on the floor. Two of the latecomers slept outside without any shelter but with an open fire that they kept going during the night. It certainly pays not to arrive late at popular huts! One of the other trampers had an incident with a leaking MSR cooker that caught fire inside the hut that needed be quickly taken outside to extinguish.

On Sunday it was cloudy as the group heading out to the Hacket carpark set off promptly from the hut, taking 7¾ hours altogether.

The group going out down the Maitai, first went up the lookout track above the hut for worthwhile views of the surrounding area. Then back on the main track from the hut it was a steady climb on an often rocky track with many tree roots up to Dun Saddle, taking one hour. Some mist was blowing through the saddle as we sheltered behind a large rock outcrop for a break. We descended the extremely rocky track to rejoin the Dun Mountain Trail below Coppermine Saddle. This section of track is no longer shown on maps but still has markers. Then it was down the well-surfaced track in the South Maitai making use of the nice new road bridge across the river, just before we reached the Maitai Dam carpark, taking 4½ hours altogether.

It was satisfying to complete a good circuit so near to home.

The group from the Hacket were Robert (scribe), Esther, Eric, Christine L, Marian and Stephen.

The bunch from the Maitai were Sue J, Maria, Rob, David S and Julie.