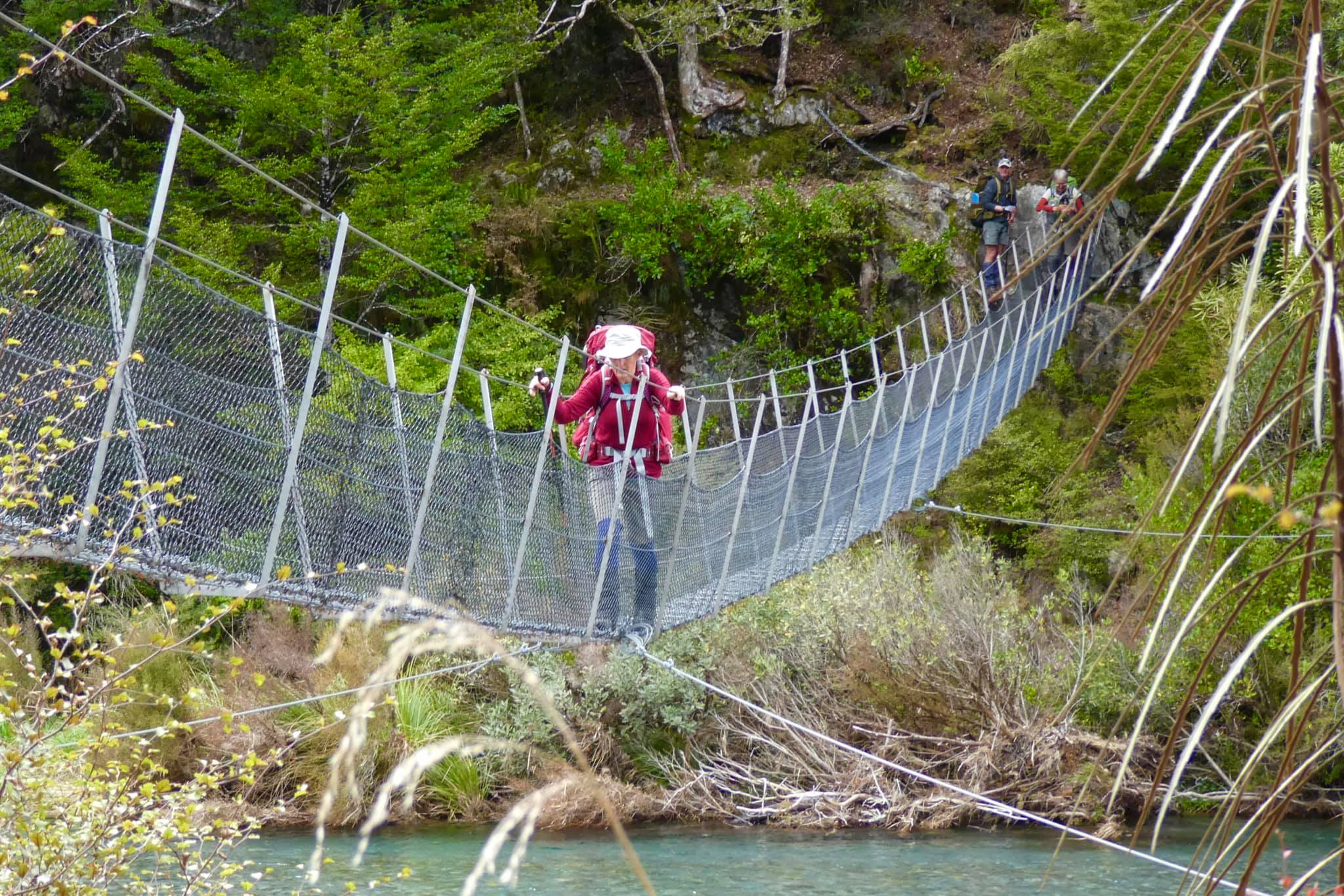 John Tait Hut (Nelson Lakes) was our main destination this long weekend and we aimed at doing some side trips in the area.

On Saturday morning we took the water taxi to the Lakehead jetty, to save us some time on the way up. The track is very popular with Te Araroa walkers in the summertime but this time of the year we didn’t come across anyone yet. We could see the results of heavy rain over winter, with some sections close to the Travers River nearly washed away. Getting wet feet was pretty much unavoidable, but other than that it was easy going through beech forests and clearings with some great views of Mount Travers at the head of the valley.

Three of us did a side trip to Hopeless Hut on the way, leaving our big packs at the start to travel light. The track follows the Hopeless Stream with a very gradual climb. The stream was beautiful with clear, blue water cascading down the rocks. Stream crossings were deeper and faster flowing, and by then even the rock hoppers got wet socks. The side track climbs very gradually and it took us 1hr15min both ways at a reasonably fast pace. Hopeless Hut is a small, quaint hut, built in 1967 and opened by Sir Edmund Hillary. From there you get good views of the scree slopes and Mount Hopeless and the Angelus Range.

We arrived at John Tait Hut by 5:30pm which made it a good 8hr day. The total distance for the trip to John Tait Hut via Hopeless Hut was 22km. Two others left their packs at John Tait Hut and did a side trip beyond the hut to the impressive Travers Falls. There were only two more people at the hut, but we had several short term visits during the night from people who did the 48hr Adventure Race in the area.

Day two the plan was to climb up to Cupola Hut for a day trip, but because there was drizzle and low fog down the mountains we decided against it as there would have been no views. Instead we retraced our steps back to the Lakehead Hut, passing several of the Adventure Racing teams along the way. The weather gradually cleared in the valley, ending up being a very pleasant day. We arrived at Lakehead Hut about 2:30pm and while having a cuppa we made the decision to stay the night there, as we were prepared for two nights out, and then walk out to Kerr Bay in the morning. There were three other couples in the hut and a family camping, and it turned out to be a very social evening. We had visits again during the night from Adventure Racing teams, catching a bit of sleep before the next stage of their race.

On Monday we departed the hut at 8am, being treated with a picturesque, glass-like Lake Rotoiti with misty fog half way down the mountains. We arrived at Kerr Bay at 11am, where Sue met her son and his partner, who had successfully participated in the Adventure Race. A tasty lunch at the General Store completed our trip. A most enjoyable long weekend, even though we didn't totally fulfil our plans, with great company.