Springtime in the Mountains 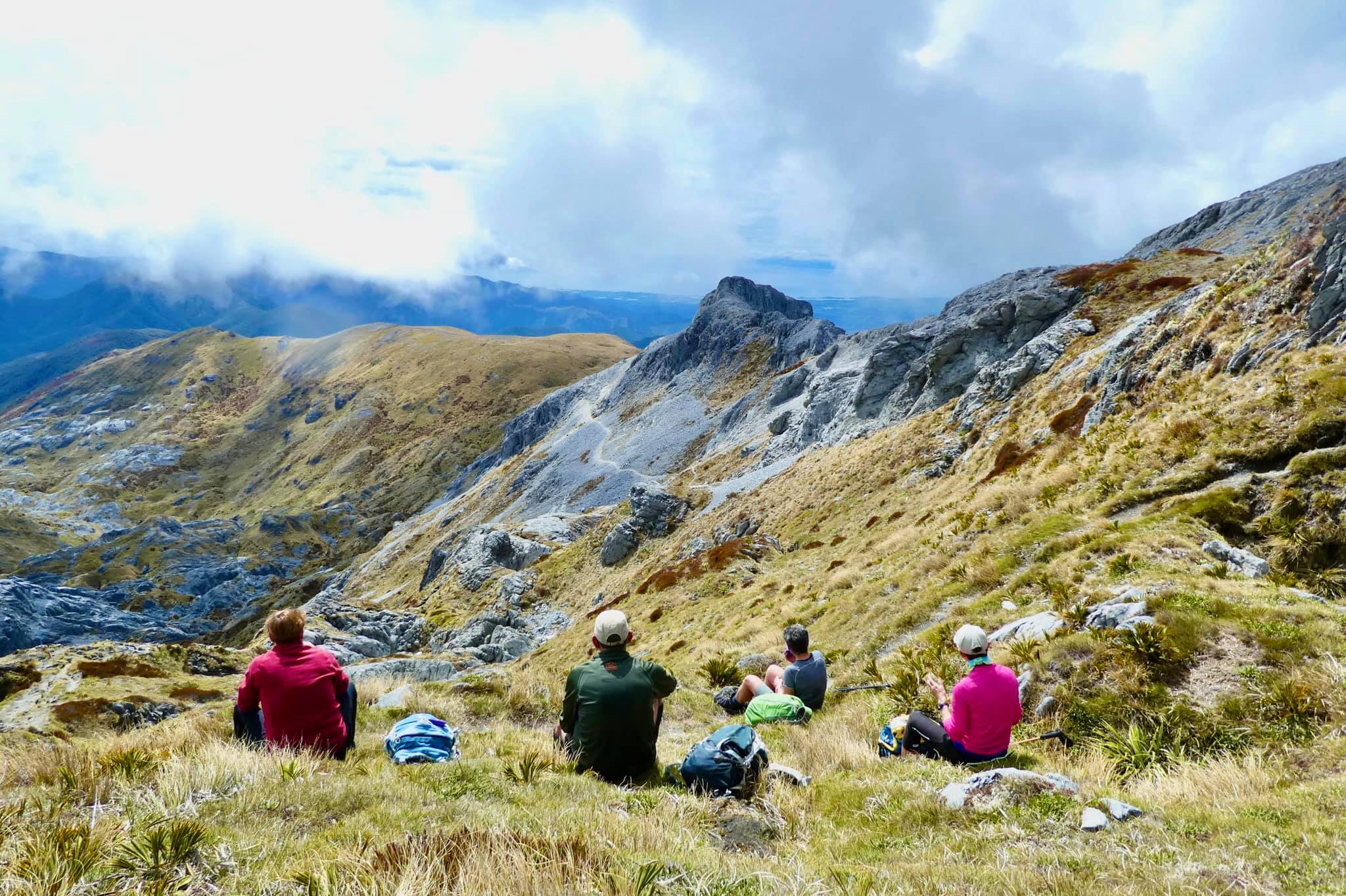 The Ellis Ridge of Mt Arthur? What? Didn’t the programme advertise Riordans Hut? Well, yes it did, but leader's-licence saw a change because maybe Riordans was a bit ambitious as a day trip, what with the long drive over to Golden Bay too.

So instead a small posse of five set off from Flora Saddle at 9am on a beautiful spring morning and made quick work of the forest track up to Mt Arthur Hut. After a brief stop for first-morning-tea, we broke out above the bushline and powered our way up the mountain. Passing Horseshoe Basin on our right, we were soon at the Ellis Hut turn-off under Winter Peak, just 300m short of the Mt Arthur summit.

We took a hard left, and stopped for second-morning-tea (see photo). What a view looking back down the main track! Then we were off again, into new territory for four out of the five of us. Small patches of snow hung out in hollows, but it was too early for a full array of alpine flowers. Grasshoppers of all colours were out in full force though, and spiders the size of 10cent pieces were also spied by the eagle-eyed.

We followed the ridge until the track dived steeply down into the Ellis Basin towards the hut far below on the bush edge. We, however, continued off-track straight ahead, and the terrain opened up into glorious expansive views.

Lunch was enjoyed in the sun on the edge of a small tarn, watching clouds of grasshoppers launching themselves into the water, many saved from drowning by our rescue efforts of walking-pole fishing.

Then we continued onwards to  the large cairn atop high point 1732. We could see clearly for miles, with not a gust of wind to spoil the day as we lingered drinking in the vistas. The hulk of Mt Arthur lurked just behind us, whilst peaks of Kahurangi and Nelson Lakes jockeyed for position close by, and further away the Inward Kaikouras were cloaked in thick snow.

And then we backtracked the way we came, down… down… down… We had afternoon tea at Mt Arthur Hut and were back at the car at Flora Saddle by 4.30pm, having covered almost 20km. Our pace was pretty brisk which had allowed us ample time to loiter up on the basin ridge.

This trip will definitely be run again on a future programme; it was quite a gem. And Riordans Hut? - well, I’m sure that it too will pop up at a later date, maybe as part of a Killdevil - Waingaro Forks - Anatoki Forks multi-day trip.

We were: Diane (Organiser and Scribe), Pete (Chief Guide), Esther, Jenny and Anna.