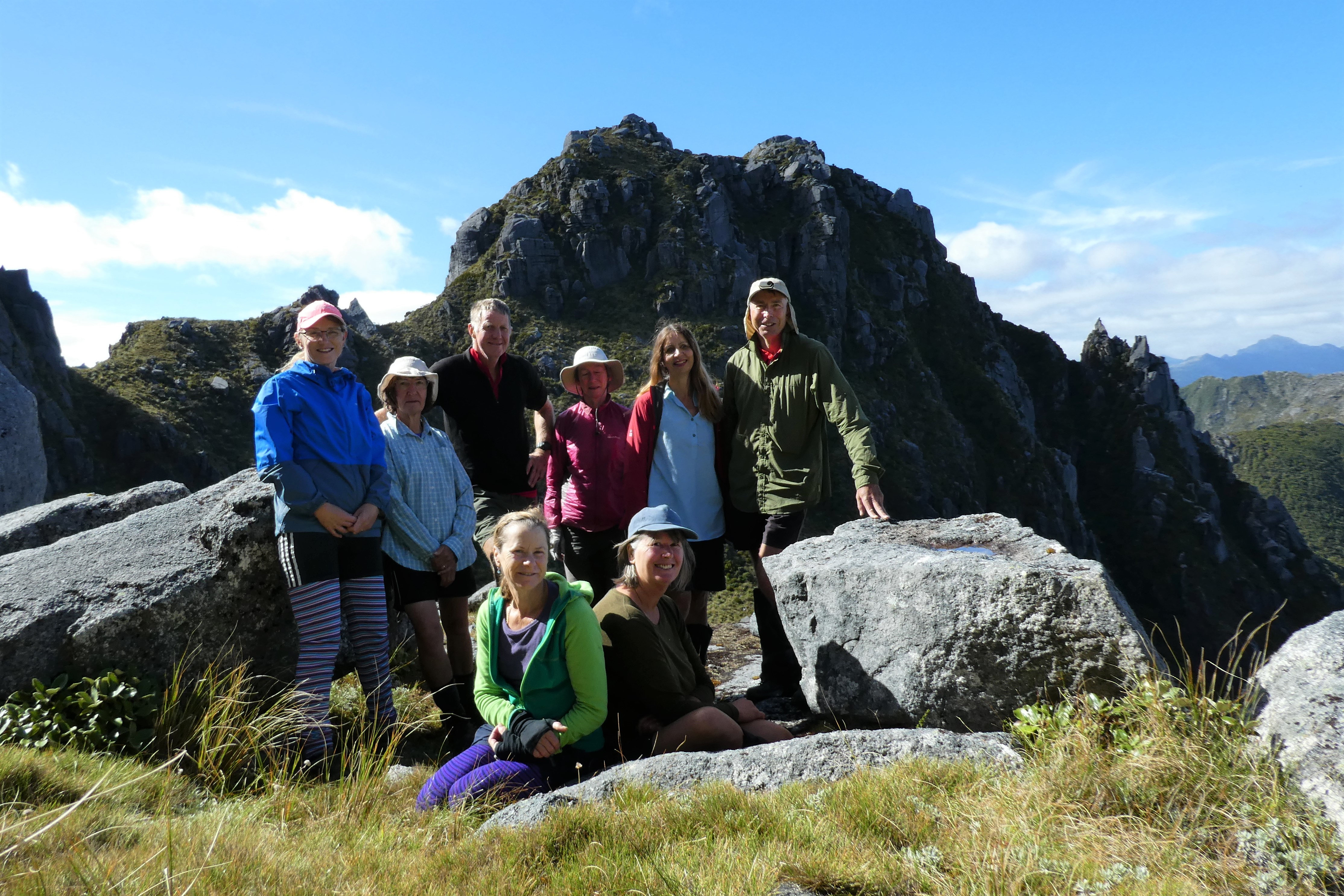 Our two cars left Richmond bright and early on a sunny Saturday morning for the three hour drive to the Buckland Peaks road end just shy of Westport. After a 5km one hour farm-road bash, we reached the stile at the start of the uphill forest section. We stopped for lunch just short of ‘Halfway House’ - which featured a sign, two empty buckets, and crystal clear views down to Westport and the Buller River.

Then it was onwards and upwards, more steeply now, to the bush edge. We bypassed the 6-bunk Buckland Peaks Hut 100m below the track, but thankfully found a small trickle of a stream to fill up our water bottles. We then carried on up through the tussock, following snow poles to our campsite at about 1240m. The eight of us sprinkled our five tents along the bank of a stream, and not content with our hot and sticky six hours tramp to get there, went wandering to check out the nearby tarns.

Sunday morning we woke up to another stunning day.  At 8.30 we set off on an Exploratory of the Buckland Peaks plateau. The poled route took us through rounded rock formations, large and small mirror-calm tarns, patches of alpine flowers including swathes of Sun Dews, and across to the high point of 1325m, with the poles finishing further on at the edge of the plateau. Our view ahead was the impressive ragged peaks of the Paparoas marching across the horizon. What an awesome place!

Then it was time to really go Adventuring. We dropped over the edge and followed a cairned route. The going was now steeper and rockier, with some sections of clambering and scrambling, and patches of thick tussock to wade through. We got to a point where it was uncertain whether the whole group could climb up a steep gut to a saddle over a spur, so we retraced our steps to the plateau. We decided to do a loop and tackle the saddle from the other side. We had a leisurely lunch on a rocky outcrop looking down at our goal and thus completing 90% of the circle.

After lunch we returned to the 1325m high point, then headed over to Townson Tarn, the biggest tarn of the Peaks. For the rest of the afternoon some meandered, some read, some basked in the sun, and some dozed in their tents. After dinner we headed back up to the top of the plateau to watch the sun go down. It was quite a performance, with the sky finally turning a very deep orange before disappearing just before 9pm.

Monday was another wind-less Bluebird Day. We packed up and retraced our steps back to the road end, with a detour down to bag Buckland Peaks Hut. It's a lovely wee hut, but unfortunately we had to give it a quick clean and remove rubbish left by the previous occupants. We spotted a Fern Bird near the hut, and then again once we entered the forest section. It was a quicker descent back to the cars than when we came up, but the road-bash at the end seemed to go on forever.

How lucky were we to get to spend Nelson Anniversary Weekend in such a magic spot!