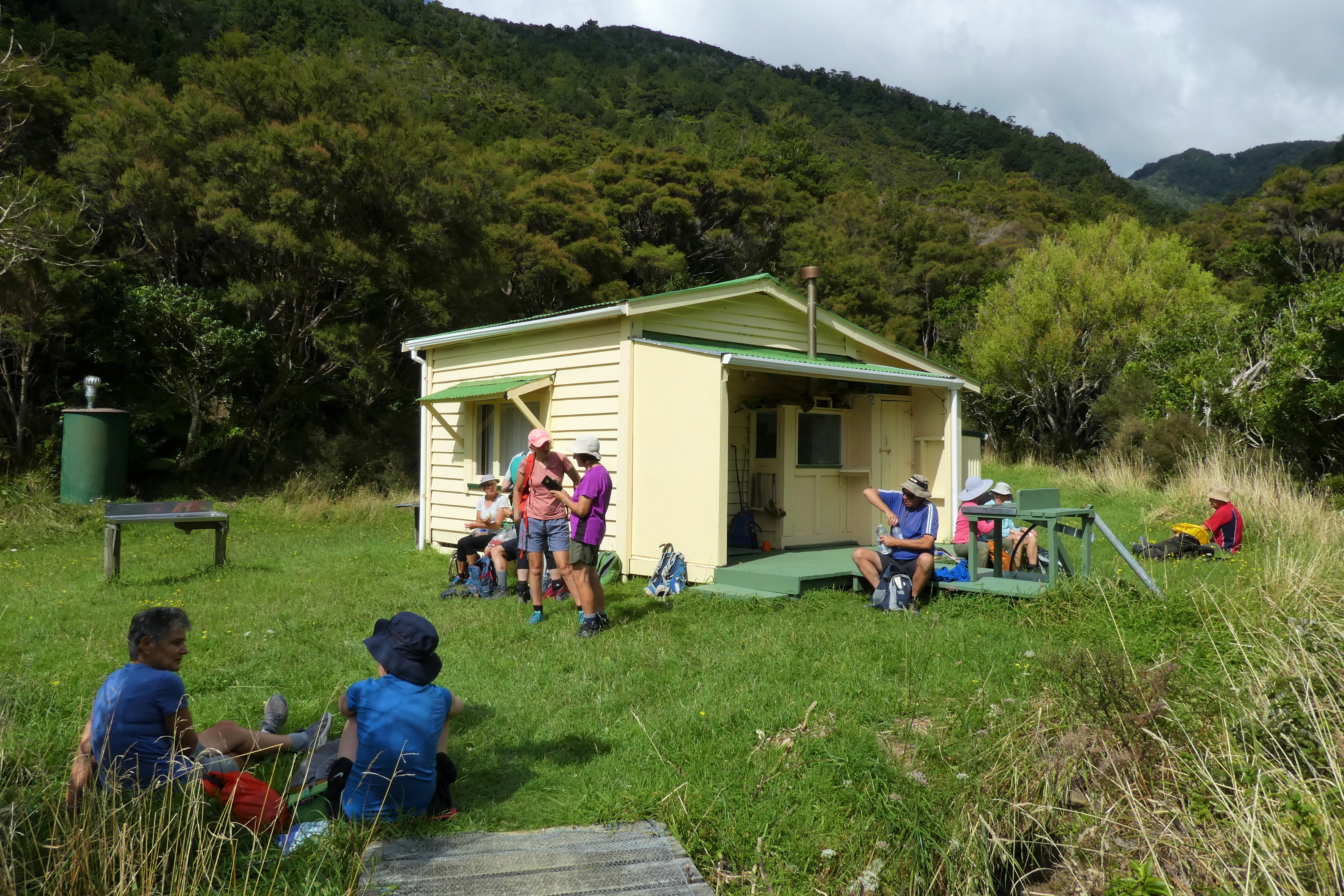 Today’s enjoyable, short, coastal walk in the beautiful Marlborough Sounds came directly after two consecutive weekends of pouring rain playing havoc with the leaders' careful planning of summer trips they’d been keen to do. This group just wanted the opportunity to get out to exercise their bodies and their mouths.

To the previously uninitiated, it’s a surprisingly long drive to Elaine Bay, turn right at the middle of Okiwi Bay. There’re commercial mussel farms in Elaine Bay itself. It was two hours before the group started walking. On the other hand there’re glorious postcard views for the passengers during the drive out there.

It only takes 2.5 hours to walk along the 9 km Archers Track from Elaine Bay to Penzance, punctuated by an enjoyable morning tea stop outside the retro holiday home at Deep Cove which stands in its glory in a small bay beside the track after about 40 mins.

Once at Penzance, the tide was fully in. There’s a small enough difference between high and low tides that one can swim regardless. The gusty northerly wind, which only seemed to blow during our lunch stop along with the heavy cloud cover, put off some contenders even although most had brought their togs. Rob and Paula showed us they’re made of tougher stuff by charging in, floating about for a bit then claiming to have enjoyed the whole experience. The others of us preferred to believe them than challenge by going in to find out for ourselves.

Afterwards we ambled back over the same 9 km, which was attractive enough it didn’t matter in the least that we were covering the same ground twice.

It was surprising how few had been along the Archer’s track before considering it’s easy, accessible and attractive. It’s worth the occasional long drive to and from. If one wants to stay close by, there’s a popular DoC camping ground at Elaine Bay shortly before the Archers Track begins.

For those interested in the stats, allow for up to 2 hours drive from Nelson and five to six hours to walk the 18 km which includes generous stops at Penzance and to admire the picture postcard views from the Archers track.

All in all it was a lovely coastal walk on a warm, cloudy day enjoyed by Alison (leader and scribe), Anne, David M, Di, Jenny, Julian, Kerry, Maria, Paula G, Pauline, Rob, Sue and Torsten with visitors Dean and Karen.