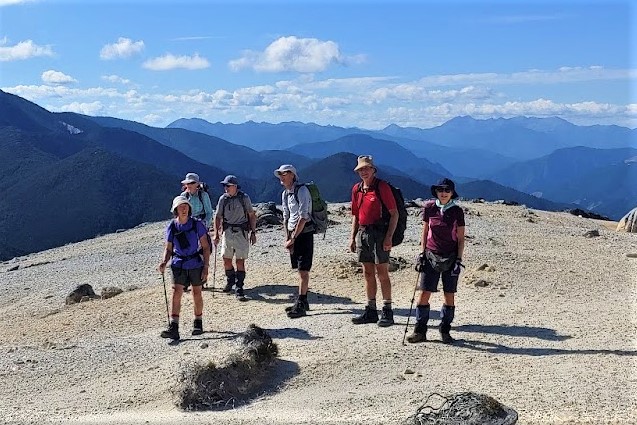 The Hope Range is a unique area. Its vegetation is interrupted by patches of granite sand and protrusions of granite boulders. Our group had permission to park on private land by Limeworks Road. Once passing the site of the limeworks, which ceased production in the late 1950s, we entered the bush and followed along an old partly overgrown, bulldozed track for the next three-or-so kilometres. Fence posts and batons were once cut and split from beech trees in this area - a time before treated posts. It wasn’t long before we were halted by some screeching sounds above us. Two kaka were making their presence known. What a treat to see them up in the canopy.

The route we were following was once a stock track from the days when sheep were taken to graze the summer alpine pastures. On this route one pops up out of the bush directly on Conical Hill. Our tenting area was in a broad saddle to the south. Flat granite sand area amongst scrub and snow grass made for comfortable tent sites. There was a bit of a welcome breeze to keep us a bit cool.

Suddenly, there was a gushing noise and looking around one camper was holding his tent as a whirlwind ripped through his tent, literally ripping the fly. Once the surprise was realised he relocated to a more sheltered spot. Fortunately we were only some five-or-so minutes from a roofless stone shelter that my boys and their cousins had built in the mid-1990s and we knew there was a fly and a tarpaulin stashed in it. This fly, anchored at the corners by rocks, made a perfect cover over the mesh tent inner.

We did a two hour circuit on the Hope Range that evening, filling our water bottles and admiring the gentianella blooming in the granite sand, on the way. A comfortable night was had by all.

Sunday was calm with some clouds. Once packed up we headed back up onto Conical Hill and then followed along the Hope Range on what’s called the ‘Lookout Range Route’ on the map. This route is marked with the usual orange triangles. After about five and a half kilometres we left this ‘route’ to head down through the bush to cross Ellis Creek near the bush edge. Then there was a 20 minute scramble up to reconnect with the route we had taken the day before, ending up at our vehicles on Limeworks Road and so our circuit was complete.