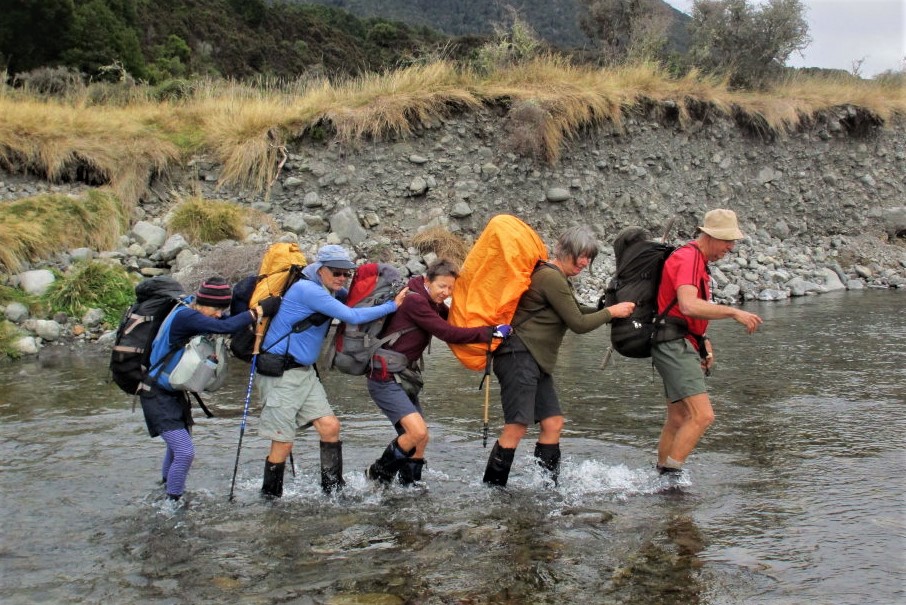 We all started together and crossed the main road onto the Nina Valley Track. The track traverses forest terraces reaching the banks of the Nina River after 1½ hours. The Nina Valley is reputedly the most beautiful valley in the Lewis Pass region, evident by some lovely blue rock pools that we passed on the way to a swingbridge crossing the Nina River. We continued through the bush alongside the river for a further two hours to Nina Hut after 3½ hours altogether. The 10-bunk hut, built in 2002, is superbly situated on a knoll about 60 metres above the river with views up and down the valley. Despite several cars parked at the start of the track, only one group of five teenagers were staying at the hut, as well as two couples tenting. Six of us tented amongst the trees and two took bunks.

On the second day it was cloudy with showers forecast as we headed for Devilskin Saddle at 1234m, about 500m above the hut. The track sidled through beech forest high above the Nina River to Blind Stream, climbing very steeply up a spur, then levelling out and emerging out of the bush beside the stream. Soon we spotted the Devils Den Biv up on the saddle still 15-20 minutes away, a promising sight. Some showers had started and the wind had strengthened as we pushed our way up through tall tussock to reach the saddle, 2½ hours from Nina Hut. The 2-bunk bivvy was occupied by a couple, but with no other sheltered place for us to stop, we continued down from the saddle amongst the tussock for 30 minutes to reach the bushline in Devilskin Stream. We soon found the start of the track behind some ribbonwood trees and started the long descent, sidling high above the stream. The showers had eased off but the trackside regrowth in many places badly needed clearing and some track markers were hard to find. Only occasional views were glimpsed down to the Doubtful River, which we eventually reached 4½ hours from the saddle. It was only an ankle deep crossing of two braids of the low river.

The track over the saddle had taken us about 7 hours, which was longer than we had expected. So instead of our original plan of heading up valley for a further 1½ hours to the 6-bunk Doubtless Hut we decided to go down valley for only five minutes to Doubtful Hut. This old 3-bunk hut was recently repainted and new bunks and mattresses have been installed. Ample camping was available under nearby trees for six of us and we enjoyed a good outdoor campfire despite the voracious sandflies.

On the third day we continued down the Doubtful Valley in mostly cloudy weather. This was all easy going, mostly on river flats until we needed to cross the Doubtful River to join up with the Tui Track alongside the Boyle River. Here most of us linked up for the ankle or calf-deep river crossing. Rather than the standard side-by-side pack strap method, a newly-learnt caterpillar version was practiced so that each person held onto the pack straps of the next person in front of them and the line moved across the river at an angle. This looked like quite a stable river crossing method maybe worth trying again in the future.

Then it was along the Tui Track on river flats heading north with an easy ankle deep crossing of the low river halfway along. Finally we crossed the main highway and onto a new section of track just inside the roadside fence line for the last kilometre to reach our finish line at Boyle Village, four hours from the start. Fitting into two cars we transferred to Palmer Lodge where we had left the third car then we all headed home.

We found the track across the saddle rather rugged and challenging but it was still pleasing to have completed a good three-day circuit. The distances were: day 1: 8km, day 2: 9.7km, day 3; 12.1 km, total: 29.8km.