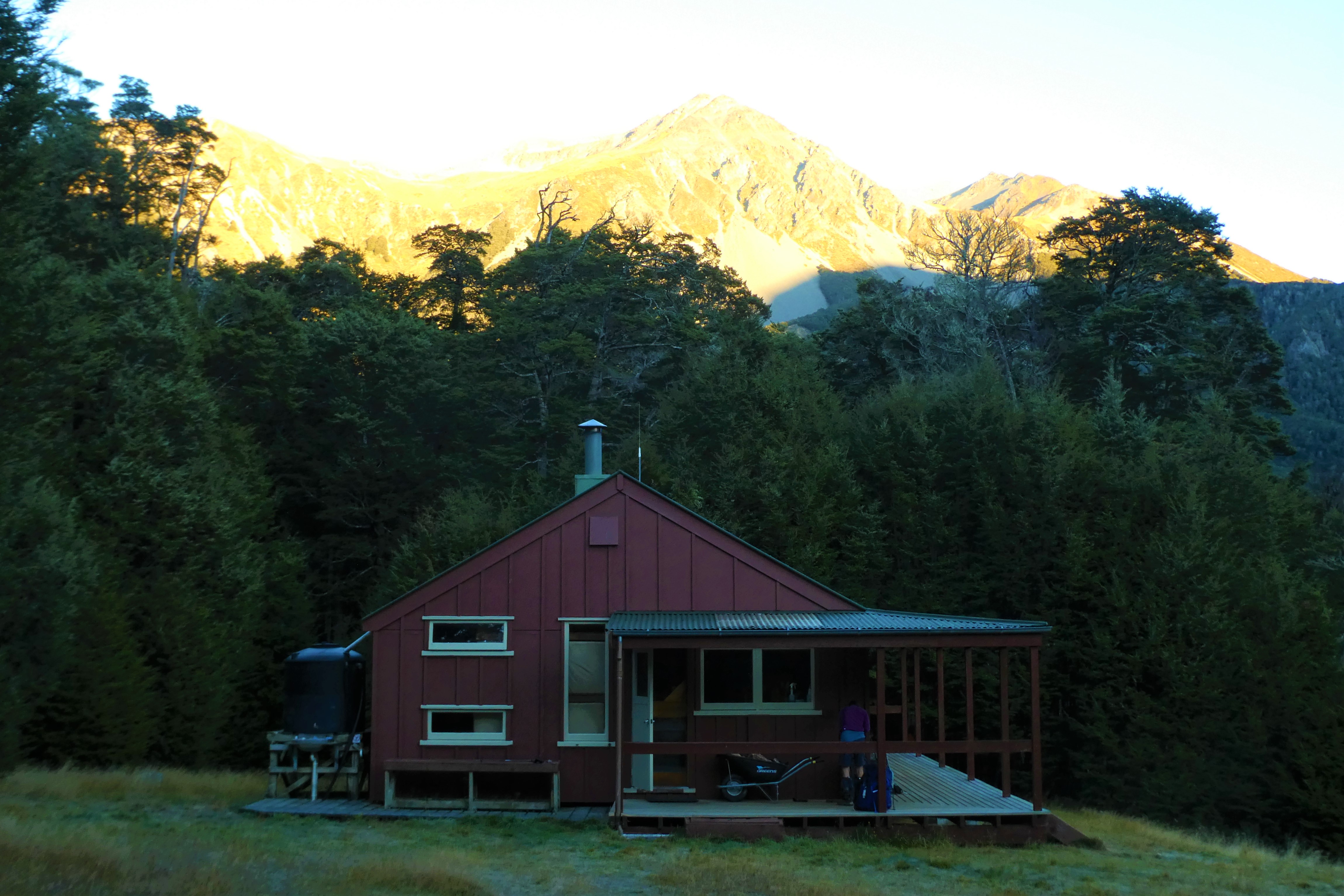 A sunny weather forecast (again!), made a good beginning for this second tramp of the week. After a car drop-off at the Cora Lynn carpark, we started our trip from the Cass settlement and walked a kilometre on the gravel road back to SH73 to the DOC Cass-Lagoon sign. The first half hour is along an uninteresting new stop bank and deer fence until it meets the Cass River. We followed the riverbed upstream, staying mainly on the true left side with the occasional river crossing. The scenery became much more interesting with the dramatic scree slopes of the Craigieburn Range on our left-hand side.

The morning cloud disappeared and we enjoyed a sunny morning tea break, admiring the mountains around us. After several stream crossings we climbed into the forest, following the Cass River until we arrived at the quaint little Cass Saddle hut, where we had an early lunch. From there it was a short and gradual climb to the Cass Saddle with great views in all directions. We spent some time here to soak up the sun and admire the views.

From the saddle we went down through the forest, at first steep, then along a well-graded track to the Hamilton Creek. The last kilometre is through open tussock. We reached the Hamilton Hut at 3pm, making the total trip time just over 6 hours and with a distance of about 17km it was clearly a good track for most of the day.

Hamilton hut is on the Te Araroa Trail, so we had expected other trampers. However, we were lucky to have the whole hut to ourselves. There was enough time left to do the short side trip to Mirror Tarn, where we got the last of the sunlight and good reflections on the water. Clouds rolled in at night and all we heard was the faint call of a Ruru.

Next morning we looked up to another blue sky. How lucky we were! We left before 8am on a good track, crossing the Harper River over a swing bridge, then following the Harper River upstream, mainly through the forest. We reached the basic West Harper hut well within the given DOC time, and had morning tea a bit further along at Windy Creek. We were unsure if it was pronounced as ‘windy’ or ‘why-ndy’, but because there was no wind, we decided it must be the latter one!

The river valley was narrow and the track weaved its way up, over bluffs and in the riverbed, crossing the river more and more as we climbed up. The last section to the Lagoon Saddle Hut is in the forest and fairly steep. We arrived at the hut before midday and with the area still in the shade, we decided to push on to the sunny saddle for lunch which is only another 100m vertical climb. The track soon left the bush and bypassed the lagoon. Once over the saddle, the views opened up to the braided Waimakariki River valley and surrounding mountains. We found a great lunch spot where we took our time to relax and take in the expansive views.

We left our lunch spot just after 1pm and continued the track through tussocks, sidling along the northern face of Mount Bruce for a while, giving us more time to enjoy the mountain ranges and river flats. Lagoon saddle is a popular destination for day walkers, and the track is well graded.

The track descends through exotic and beech forest to the Bealey Hut, and from here it is only a couple minutes down to the carpark.  We were back at the car just after 2:30pm, leaving enough time to make it to the General Store in Arthur’s Pass for a treat!

Those on the trip: Di (Leader), Pete, Eric & Esther (Scribe)