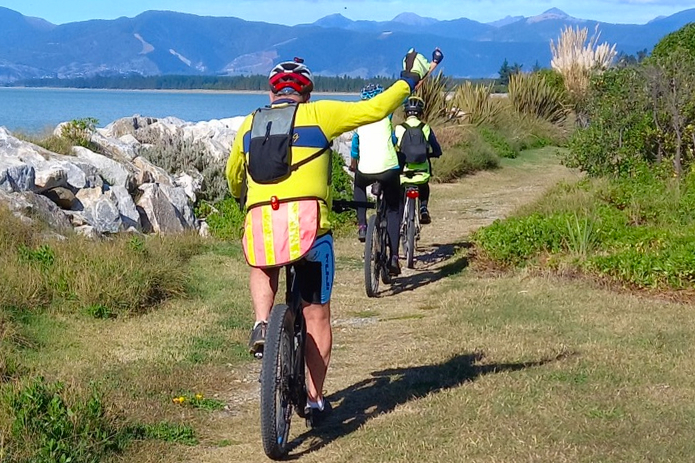 Tasman’s Great Taste Cycle Trail has at least nine different sections with varying degrees of difficulty (grades 1-3). Waimea Tramping Club has done several of these in the past few years; this time it was the Mapua to Kina Beach and beyond circuit.

Leaving Mapua Wharf around 10am, five of us gently cycled along the road and footpath to Ruby Bay. A left turn and the first hill up the road to join the track, gave us a good workout. Robyn and Odette showed they had been practicing as they waited for the rest of us for quite a few minutes. A family came up behind us were heading to Motueka, but the young fella (around 9 years old) wanted to finish there and then. His dad promised him a donut at the finish and that perked him up.

Along the road we admired some lovely homes, then we passed Jester House and in no time we were at the Tasman Store, but which was closed today. Morning tea was coffee and muffins on a big wooden table in a park near the motorway. The group decided to carry on, going under the motorway and up another hill along the path at left-hand side of the road. We pedalled for another 30 minutes then decided to head back and arrived at Kina Beach around 12.30 for lunch. We had pleasant surroundings, the tide was going out, and several people were out enjoying the sunshine.

After lunch it was back the same way. A little after Ruby Bay we took a left turn and cycled the trail behind the sea wall along the Kina Coast, my favorite part, which took us out near the Mapua shops. Then it was a straightforward stretch back to Mapua Wharf to finish around 2.15pm. Most went back to Robyn’s for tea and muffins. I enjoyed the leisurely cycle with good folks and a feeling I had done some exercise.

Those out were: David (leader and scribe), Julian, Odette, Robyn and Lynley.