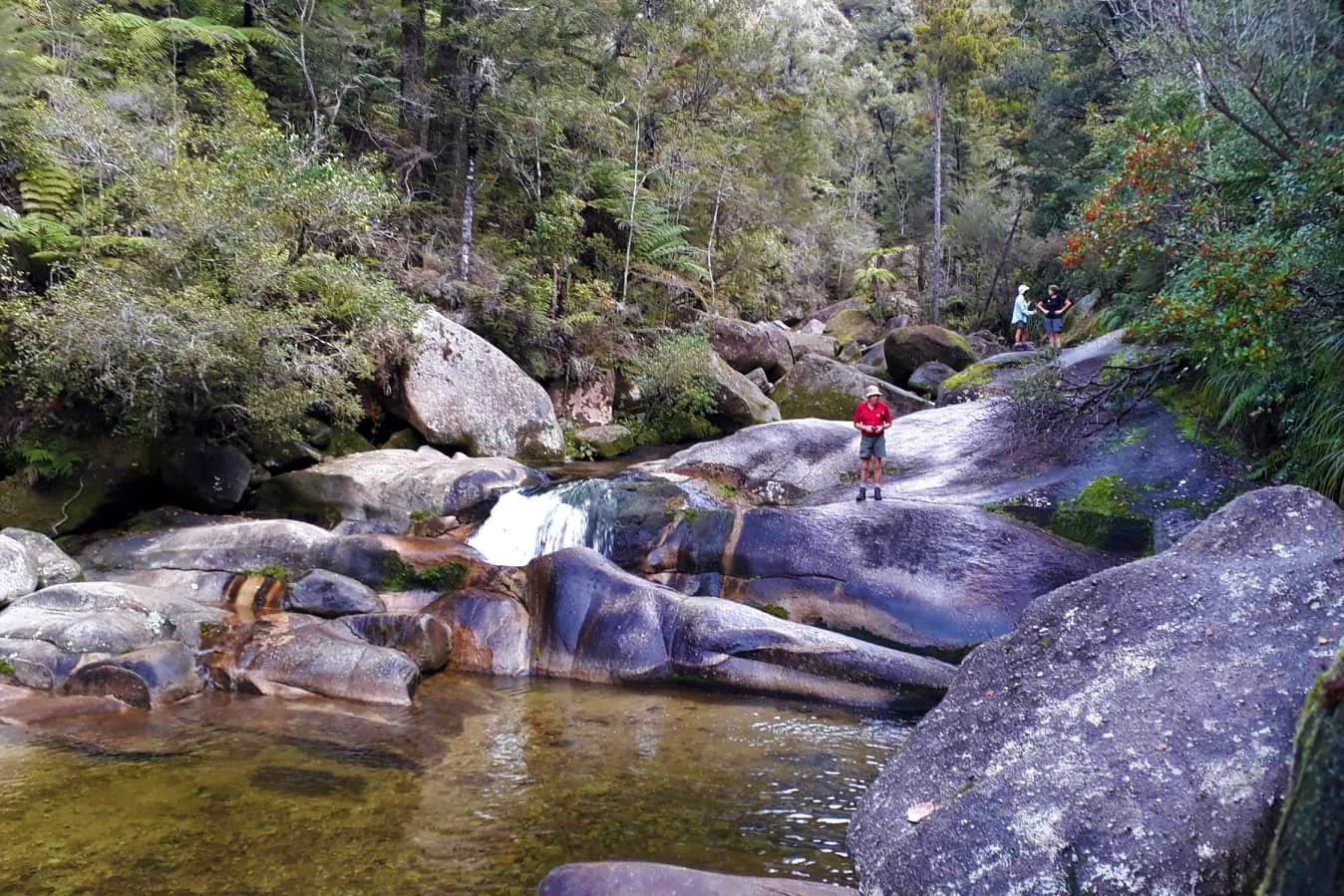 A group of seven departed on the Saturday from Marahau carpark at 9:30am on a cloudy, calm morning. We followed the Coast Track until Tinline Campsite, where we took the Inland Track that takes you up to Holyoakes Clearing Shelter. To start with it is a gradual incline and then becomes a bit steeper with tree roots and rocky patches. Soon after stopping for morning tea we took the opportunity to see the view over Marahau and beyond, at a lookout point, before entering the bush for the majority of the day. The sun was beginning to come through the clouds (there was predicted to be no sun all day!) and the day was warming up considerably. It was onwards and upwards from there.

Eventually we came to the junction where the track turns right to go down to Anchorage. We followed this for a short time before stopping in a sunny spot on the track for a welcome break for lunch. After lunch we carried on down, taking care as the track was very slippery on the hard clay in places, even though it was relatively dry. Project Janszoon are doing good work with all their trapping as we were treated with melodious song of the bellbirds and cheeky fantails flitting in and out of the bushes around us.

As we descended we had brief clearings in the bush to see wonderful views below of Anchorage and Torrent Bay. At the next junction we had made a group decision to take the track going down to Torrent Bay so we could do the side trip to Cleopatra Pools, as it was early enough in the afternoon and the weather was still good. The pools are picturesque with their series of rock pools, small waterfalls and the natural waterslide all surrounded by rocks covered in moss. A popular place in the summer for swimming.

It was only 50 minutes walk to reach Anchorage Hut from there. After settling ourselves into our bunkrooms, a hot drink and snacks were enjoyed. The weather had begun to deteriorate and was drizzling so an amble along the beach did not become an option. Instead it was more chatting and dinner before retiring for the evening. It was a very pleasant night in the wonderful Anchorage Hut in a beautiful location.

The warden advised us to leave early on Sunday morning as there was a heavy rain warning arriving later. We heeded his warning and were away from the hut just after 8am to head back to Marahau on the Coast Track. After a climb out of Anchorage we had a lovely walk along the coast, stopping for morning tea at Apple Tree Bay where we met up with a couple of opportunist weka. From here it was a good pace back to the carpark arriving at midday.....and it still wasn't raining, so we were fortunate with the weather. It was a most enjoyable weekend with great company.