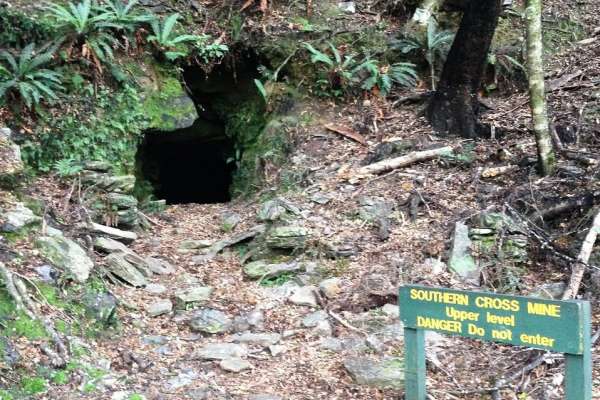 As it’s quite a drive to the Waikakaho end of this tramp we decided to leave Nelson at 7.30am. This meant that by 9.15am at the Cullensville end and 10am at the Waikakaho end, trampers were on the track. Cullensville was a thriving gold mining centre in the late 1800s, complete with bakery, bank, stores, blacksmiths and hotels. Interestingly the hotels ran for 24 hours as miners worked 8 hour shifts changing at midnight, 8am and 4pm and the men always wanted a beer at the end of their shift. The gold here was high quality but the rush lasted only a couple of years and then the town was abandoned. All that remains now are some signs indicating what once was. From both ends it was a gradual ascent up an old miners track. Half an hour before the saddle on the south side is a small grassy clearing with the remains of a stone chimney where a hut stood in the 1890 quartz era. Our two groups met near the saddle at 12.30pm, so we had lunch together. Five minutes above the saddle is a lookout point from which one can see Cloudy Bay and Cape Campbell, not to mention the Marlborough plains and the Kaikoura Ranges beyond.

Descending down the Waikakaho side we were soon to detour to the Southern Cross mine shaft and then it was back to the Village Clearing. This terraced clearing was a centre of activity with about 200 miners employed in the mining or the processing of the quartz. The only remains are a stone chimney and some stone walls. A little further down we detoured briefly again to see the entrance of another mineshaft and the site of the cableway that took the rock to the valley below. The lower part of the track, although still in trees, was clay and so one had to tread carefully so as not to slip. It was 3pm when we arrived at the end of the Waikakaho Valley Road. As we had swapped vehicles at Havelock it meant we arrived back at our own vehicles and could then drive home.

Those coming in from the Linkwater end were; Rob, Maria, Alison, Lesley J and David S.

Entering from the Waikakaho Valley were; Julian, Jacqui, Vanessa, Donell and Katie.