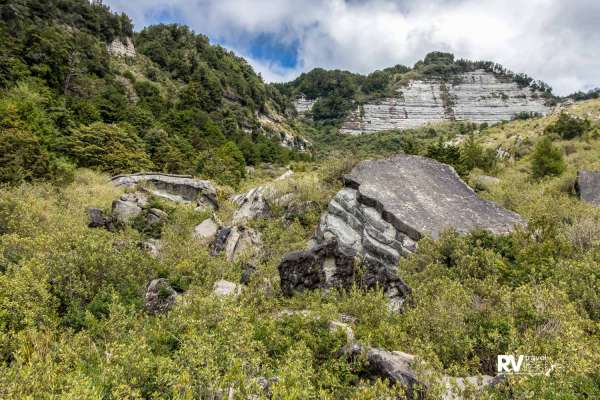 When one is heading to the town of Murchison, on the left about 20 minutes out you can see a transmission tower up on the hill, so when that happened to me two years ago I found out I could get up there, and well the rest is history. Firstly though you do need permission from the farmer David James, as the start is on his land, but he was pretty good about it. There were four of us at the start just after 10am, but before we got underway there were some basic stretching exercises to complete (about 15 mins) and then the different techniques of climbing over the locked gate. This is a four-wheel-drive track to the top and you’re into the hill almost straight away, but we all stuck together. After fifty minutes it was a welcome morning tea stop, and it was quite warm at this stage and Jacqui quite enjoyed spotting the various flowers on the trail. The road winds round and its steady going, sometimes a sharp incline and then a small one, then about 60 minutes later it opened up and we could see the repeater station. What a difference it makes to one’s confidence – our pace quickened a little, but it was still a way to go. Then at last, the top – what a view – Mt Owen, the St Arnaud Range and the Buller River.

It was colder today on the top than when I did this a month earlier, even when there was snow there then. Although sunny the wind was strong, so we looked for a spot at the back of a large building for shelter. After munchies we had time to explore the surroundings, take photos and work out the points on top of other mountains. On this trip it was back the same way, leaving about 1.45pm. Going down sometimes can be harder on calves and knees but good conversation and future trip ideas soften the blow a bit. In just over two hours we were back at the cars with some final stretching exercises. In conclusion this tramp was not easy, at least a medium, with sweet views and a good sweat. So as my friend Sweet Pea would say:

“A top day for us with plenty of scope

And all of the party we able to cope”

Those on the trip were: David (leader), Lesley G, Jacqui and Robert.