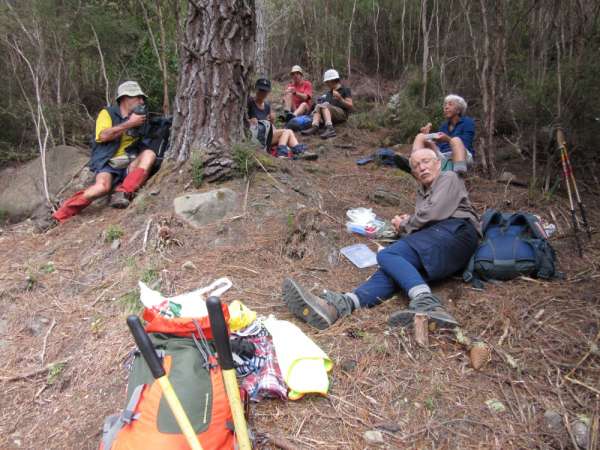 On a cloudy but warm Saturday, five Waimea Tramping Club members met at Richmond at 8am, meeting two others at the Hacket car park soon after. From there we walked up to the start of the new loop track that we have been working on for some time. Progress is sporadic, as we have needed to wait on DOC as and when they have been able to, to cut more of the kanuka and rubbish, allowing us to clear it from the track. This was the final cutting needed to clear the track access and it is now quite walkable for its length. Today’s seven took to the clearing with enthusiasm, so much so we were finished by lunch time. I thought we may not finish it in a day but I well under estimated the effort put in.

Lunch was a leisurely time, under the shade of a large pine. Five took a walk after lunch up to the Serpentine Saddle and on return two left and the others followed soon after, arriving back at the car park about 2.30pm. Those enthusiastic members were Andrew, Geoff, Lesley, Ken, Maria, Rob and Esther