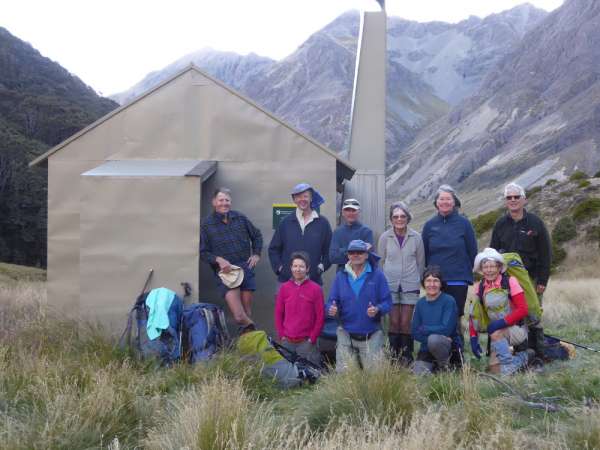 On Friday morning ten keen trampers travelled up the Rainbow road, which required good 4WD vehicles on the rather rough surface. We paid the $25 road toll for each of our three vehicles at the old Rainbow Homestead. We were disappointed to be told we would have to pay again on our return on Sunday. Unfortunately staying any longer than overnight incurs the expense of another road toll.

Just before the road bridge across the Rainbow River is a barn on the roadside and opposite this we turned off onto a rough narrow side road and travelled a few hundred metres and parked beneath a transmission tower at the end of the road. We set off along the wide valley of the upper Rainbow and after 30 minutes we crossed the Rainbow River. Being late summer the river was low and easy to cross – only about ankle deep. We then mostly followed old vehicle tracks amongst grass and a few grazing cattle. We needed to re-cross the river before climbing up an old bulldozer track above the Rainbow Gorge. From here the valley opened up to wide river flats with grand views of the junction of the Paske, Rainbow and Begley rivers. We crossed the Rainbow River about knee to thigh deep and headed up the Paske Valley. The route is mostly unmarked and follows the true left of the valley soon climbing up high terraces amongst tussock. Partway up a track brought us down closer to the river amongst matagouri. Only the upper part of the valley has some areas of bush and when we reached this bush we crossed the river to tussock and soon reached Paske Hut taking about six hours. The hut is a cosy six-bunk Forest Service version built in 1968 for deer cullers and is magnificently sited with commanding views of the upper Paske Valley and Mt Belvedere. Four people bunked while six of the group set up their four tents. We settled in at the hut but some of the group were twice locked in the hut by one of the group because unfortunately the hut door has a latch on both sides. The night was not quiet, with a strong wind rattling the hut, especially the flue of the open fire.

Saturday was a glorious day, without much wind as we set off up to Paske Saddle. We continued up the flats to near the head of the valley then climbed steeply through some bush emerging onto tussock where we stopped to enjoy the gorgeous panorama of the scenic valley below us. We continued up to the saddle, only the last few minutes being very steep. This had taken us 2¾ hours from the hut. Again we soaked up the superb views and on the way back we detoured slightly to descend scree slopes then returned the same way back to the hut.

There were more strong winds overnight, but Sunday was fine as we returned down the Paske Valley. After going above the Rainbow Gorge we all crossed the Rainbow River to visit Rainbow Hut. This ex-DOC hut is now owned by the Rainbow Station, but does not seem to be used much. Ambling down the Rainbow Valley we followed the true left side mostly on river gravels but we still needed to cross the river to get back to the cars. Paske Hut is not often visited, averaging only 50 visitors per year, but is certainly deserving of more visitors, if only access was made easier. Beautiful countryside, easy river crossings and happy trampers.